This is the second largest allocation the company made to a project competing for a parachain slot. 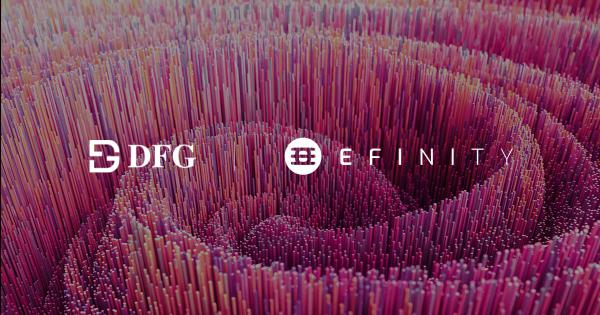 Photo by Mitul Grover on Unsplash

The allocation, worth over $7 million at press time, is the second time DFG invested in a project competing for a Polkadot parachain—earlier this month, the company contributed 500,000 DOT to Acala.

DFG looking to invest in as many parachain contenders as possible

As the launch of Polkadot parachains gets closer, the race to secure the coveted two-year slot is getting hotter and hotter. Acala and Moonbeam both saw hugely oversubscribed crowdloans and the race for the remaining slots is bound to be even tighter.

DFG, one of the leading cryptocurrency investment firms in the industry, has allocated 200,000 DOT to the Efinity crowdloan, continuing its investment in the Polkadot ecosystem. Efinity is a next-generation blockchain platform developed by the Enjin team, which pioneered the NFT ERC-1155 standard on Ethereum. The platform wants to create a new developer and user-friendly experience on Polkadot, aimed at supporting the emerging NFT economy.

We support 200K $DOT to @efinityio crowdloan! I am very impressed by what @enjin @efinityio team have achieved and will try my best to support them! $DOT $EFI $ENJ 🚀🚀 https://t.co/fokHYu5tA9

James Wo, the founder and CEO of DFG, said that the company has been looking into the NFT sector since 2019 when it decided to include it in its investment strategy. However, a lack of a designated blockchain for NFTs dissuaded the company from engaging with the technology until they encountered Efinity.

“The presence of Efinity shows us a fresh mindset of solving this sore point within the industry. It will build a scalable cross-chain network that allows the establishment, use, and transaction of NFTs to become easier, faster, and more affordable so that the trading volume and adoption of NFTs can be significantly improved,” he said in the company’s announcement.