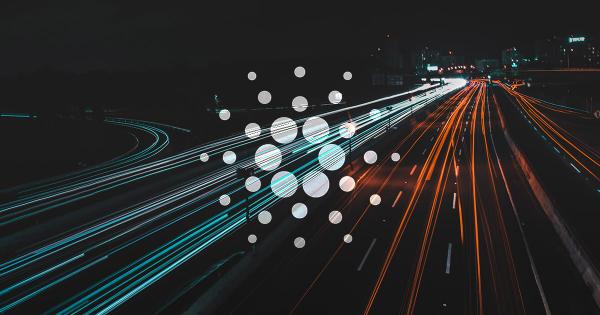 Photo by Cris Ovalle on Unsplash

While the first wave of pioneers is testing Shelley, Hoskinson took to YouTube to answer community questions, touching on topics such as incessant trolls, roadmap deadlines, and handling a future Cardano that could process thousands of transactions every second.

Putting an exclamation point at the launch of Shelley

The first select group of participants has been using the Shelley testnet for well over a week now, and they have just begun to get the hang of it in the past few days. Charles Hoskinson, the CEO of IOHK, took to YouTube to share this and a slew of other updates about Cardano as more progress is constantly being made in its development.

In a two-hour AMA session, Hoskinson answered questions from the Cardano community and addressed some of the most frequently talked about issues in the space after sharing the progress of the pioneer testnet.

The first week of the testnet was spent educating the pioneers about how Shelley would work, which included some stake pool operators and various other friends and associates of IOHK. This week, Hoskinson said, was all about making blocks and propagating blocks.

Once the pioneers get the hang of the staking process that Shelley will bring, the testnet will gradually be opened to the general public. In June, IOHK will schedule a balance check after wiring in the Shelley wallet and Daedalus and focus on getting all of the Shelley users online throughout the month.

If everything continues developing at the same pace as it did when the Incentivized Testnet was launched, we could see Shelley up and running as early as mid-June. Hoskinson spoke several times about how both the company and the stake pool operators were incredibly satisfied with what they’ve seen from Shelley, a feat that is clearly visible in Cardano’s numbers.

“There has never been, in the history of cryptocurrency, a testnet as successful as the Incentivized Testnet.”

Hoskinson was visibly proud of the 19,000 validating nodes and over 1,200 stake pool operators that have participated in the ITN so far.

The weeks of effort IOHK has put into Shelley will culminate at the end of the month, when the company is set to host a virtual summit. Last week, Hoskinson said that a contract with the software company hosting the summit has been signed and between 5 and 6 workflows are already being developed.

While more concrete announcements will have to wait until the end of the month, Hoskinson did say that Plutus will be a major topic on the summit as it’s set to receive a “big update.” When it comes to the summit’s “very secret guest” Hoskinson mentioned last week, he still didn’t disclose who it might be. Some speculated that it would be Steve Wozniak, the co-founder of Apple, or Jack Dorsey, the founder of Twitter and CEO of Square.

Hoskinson denied that either one of the two would attend the summit, telling viewers only that it would be someone whose work was essential for the crypto industry to exist.

Shelley bringing a wind of change to the crypto industry

Hoskinson also addressed some controversies surrounding Cardano and IOHK, saying that the incessant trolling the project has been faced with was no longer meaningful to the company.

“It’s getting almost comical for us,” he said about the trolling surrounding the launch of Shelley.

While constructive criticism is something Hoskinson always claimed was welcome, the most recent wave of negative comments about Cardano crossed the line from criticism to outright hate. The animosity a certain part of the crypto industry feels towards Cardano was seen when the Wikipedia article describing the project was suddenly taken down due to the “novelty” of the project and a lack of verified sources.

Hoskinson said that the Cardano community was working on creating a post that meets the Wikipedia guidelines, but said that the editors of the platforms were not being reasonable. Firstly, it was reportedly stated that Forbes and Bloomberg articles couldn’t be used as a “legitimate source” for content about Cardano. Secondly, much less important projects had their own extensive pages, which Hoskinson found absurd and “kafkaesque.”

He used the example of Legends of Valour, a 1992 RPG game he purchased earlier this month, which has its own Wikipedia page backed with equally legitimate sources as Forbes and Bloomberg were. Unlike the game, which has “less than five people playing it” at any given time, Cardano is a $1.3 billion market cap project used by hundreds of thousands of people and backed with over 60 peer-reviewed research papers. It, however, doesn’t have its own Wikipedia page.

Nonetheless, Hoskinson believes that as the Shelley mainnet is getting closer, so is the effect the Cardano had on the crypto industry becoming more evident. Despite not being profitable for the first few years, with most of the costs being covered out of his own pocket, Hoskinson said that “pound for pound and dollar for dollar” more code has been delivered to Cardano than to any other project.

Even Ethereum, the world’s second-largest cryptocurrency which Hoskinson helped found, has begun taking formal methods seriously because of Cardano’s impact. However, Hoskinson doesn’t see Ethereum as Cardano’s competitor. When asked whether Ethereum or Algorand would be a bigger competitor to Cardano in the future, Hoskinson said that it would be neither of them. What Cardano is going to compete with, he explained, is the digital dollar that might be launched by the U.S. Federal Reserve.

“And we’re gonna win that one.”

All of this means that there is a high probability that IOHK will be able to meet every deadline it has set for this year. Hoskinson addressed the Cardano roadmap when asked by viewers about deadlines, saying that everything necessary that needed to be done on Basho, the era of Cardano that will bring about scaling, has already been done. The scalability approach has been solved and the stake pool model has been leveraged, Hoskinson said, adding that all that is left to do for Cardano’s upcoming phases are small-scale and technical.

Addressing the problem of scalability

While scalability has always been one of Cardano’s main value propositions, the upcoming Shelley mainnet now means that it’s a problem that needs to be dealt with. Viewers were interested to know how IOHK planned on solving the problem of data storage of a blockchain with the ability to process 1000 transactions per second.

Hoskinson said that both he and the company have given the topic a lot of thought. This, he said, is one of the fundamental failings of Bitcoin—becoming too large to be a replicated artifact. Once the blockchain gets filled with terabytes of data, it loses one of its most important abilities called inclusive accountability. This allows everybody participating in the blockchain to verify the information to the same level of truthfulness, and gets lost once the data set becomes too large for every user to hold it.

To mitigate this issue, Cardano needs to solve three separate sets of problems, the first one being treating the resources of the blockchain as a precious commodity while allowing block size to grow slowly over time. IOHK solved this by taking operations and data with a low economic priority such as microtransactions and pushing them into level 2 solutions. Keeping the second layer private, censorship-resistant, and open to participation is something he believes Hydra has already accomplished.

Secondly, fundamentally different cryptographic primitives need to be used to protect the data on the blockchain. The best way to do that, he explained, is by using recursive snarks.

And finally, the blockchain needs to move from a replicated to a distributed decentralized system. That way, everyone that uses the blockchain will only have a shard of data and not have to store and hold the entire blockchain.

Most of these problems, if not already solved, are currently being worked on at IOHK. However, Hoskinson said that there was a somewhat controversial topic in the world of scalability that he hopes he could solve in the next five years—economic garbage collection. Siphoning through all of the data on the blockchain and deciding what is important enough to stay there forever has been a tough topic in the industry, but is something Hoskinson believes could eventually give Cardano the ability to serve a billion users.

Launched earlier this week, the Cardano’s pioneer Shelley testnet gathered a select group of pool operators that have been testing the Cardano network.

With Shelley mainnet closer than ever, IOHK’s education director explained how the network will stay protected while maintaining high efficiency—pledging.

Cardano (ADA) is caught within a firm uptrend, but sentiment data shows investors don’t seem to have taken notice

Cardano (ADA) has been flashing signs of growing strength throughout the past several days and weeks, with the altcoin rapidly beginning to incur some notable momentum.