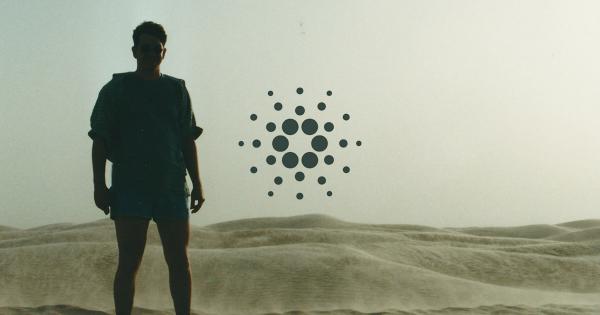 Photo by Waldemar Brandt on Unsplash

Cardano (ADA) has seen a sharp price decline today that has come about as the entire crypto market shows some signs of weakness.

ADA’s weakness is being perpetuated by a high-time-frame resistance level that it is currently pushing up against, and analysts do believe that this could cause it to see some notable losses in the weeks and months ahead.

However, an analysis of the cryptocurrency’s “In/Out of the Money” data seems to indicate that its heaviest near-term resistance doesn’t exist until quite a way higher from its current price levels.

According to this data, Cardano could push higher before its intense upwards momentum stalls.

At the time of writing, Cardano is trading down roughly four percent at its current price of $0.085.

This decline has also caused ADA to shed three percent of its value against its Bitcoin trading pair.

The root of this weakness appears to be the turbulence seen by the aggregated crypto market, as Bitcoin recently faced a harsh rejection at $10,000 that led it back into the $9,000 region.

It is important to note that Cardano has been caught within a macro uptrend over the past several weeks, rallying from monthly lows of $0.04 to its recent highs of $0.09.

This intense uptrend has allowed it to significantly outperform the aggregated market, but it still remains in a precarious mid-term position as it trades beneath a massive high-time-frame resistance level.

One trader who posts under the moniker “TraderXO” recently offered a chart showing the importance of this level, also pointing to an overextended RSI.

On-chain analysis shows ADA may have room to rally

Despite the strength of the HTF resistance seen on the above ADA/BTC chart offered by TraderXO, an analysis of the cryptocurrency’s “In/Out of the Money” indicator from blockchain analytics firm IntoTheBlock shows that there is little resistance until it reaches roughly $0.11.

While zooming in and looking towards the same indicator around Cardano’s current price level, it does appear that it faces some short-term resistance between $0.085 and $0.092.

Once this resistance is firmly surmounted, it’s clear skies ahead for the cryptocurrency.

Because ADA does not appear to be too closely correlated to Bitcoin at the present moment, it is possible that its reaction to its near-term resistance will determine which direction it trends in the weeks and months ahead.

Cardano (ADA) has been caught within an intense uptrend in recent times, which has allowed it to firmly outperform both Bitcoin and most of its other peers.