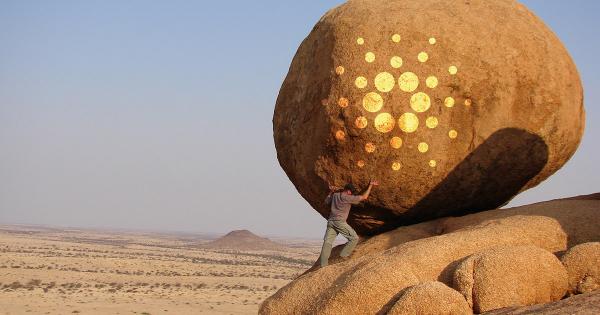 Photo by Vicky Sim on Unsplash

Cardano (ADA) has been caught within an intense uptrend in recent times, which has allowed it to firmly outperform both Bitcoin and most of its other peers.

This intense rally has come about as development activity on the blockchain booms – being an overt sign of fundamental strength that ultimately suggests that the crypto’s mid-term outlook remains incredibly bright.

It is important to note that previous reports from CryptoSlate show that investors don’t seem to have taken too much notice of the 11th largest digital asset’s recent price action, but this may soon change.

At the time of writing, Cardano is trading up just under nine percent at its current price of $0.06, marking a notable climb from daily lows of $0.05 that were set earlier this morning.

This latest push higher has come about as Bitcoin and the entire market begins flashing signs of strength, with the benchmark cryptocurrency pushing up to highs of $9,550 before facing some immense resistance.

It is important to note that today’s ADA upswing simply marks an extension of the momentum that it incurred earlier this month when it bounced at lows of $0.045. After tapping this support level, the crypto kicked off a steady uptrend that has allowed it to set fresh monthly highs today.

This rally is being driven by more than technical strength, as data suggests that the crypto has also seen a notable uptick in on-chain development that could be boosting it.

Santiment – a blockchain data and analytics firm – spoke about this in a recent tweet, explaining that this trend of climbing Cardano development activity has been going strong since the start of the year.

“ADA continues to show signs of strength in the market, and there are some emerging decoupling indications. Year to date, its impressive development activity rate continues to rise.”

Will ADA go parabolic once investors take notice of its strength?

Although ADA’s recent uptrend is certainly nothing to scoff at, it has still been far more tempered than those seen by other altcoins like Chainlink and Tezos.

As CryptoSlate reported last week, social data from Santiment does seem to indicate that there has been little interest in it from investors despite Cardano’s ability to outperform Bitcoin in recent weeks.

This can be seen while looking towards the lack of any substantial rise in social volume on the below chart:

It is possible that its fundamental strength will eventually draw greater investor attention to it, subsequently fanning the flames of Cardano’s ongoing uptrend.