Cardano (ADA) and Polkadot (DOT) outpaced Ripple’s XRP today, pushing it out of the top five cryptocurrencies by market capitalization. 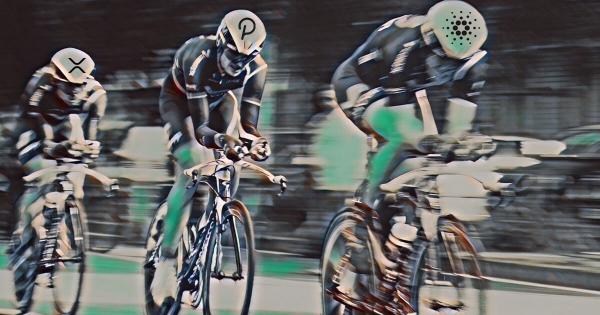 Photo by paolo candelo on Unsplash

Cardano (ADA) and Polkadot (DOT) outpaced Ripple’s XRP today, pushing it out of the top five cryptocurrencies by market capitalization.

Market capitalization represents the total amount of coins currently in circulation multiplied by their price. At press time, ADA and DOT are up around 23.5% and 35.2% over the week while their market caps amount to roughly $27.8 billion and $30.25 billion, respectively.

Thanks to a few recent boosts, Polkadot is currently ranked 4th while Cardano took 5th place in the list of top five cryptocurrencies, pushing XRP back to 6th place with a market cap of $25.17 billion.

As CryptoSlate reported, XRP’s price has been suffering heavy losses after the US Securities and Exchange Commission (SEC) filed a $1.3 billion lawsuit against Ripple Labs, alleging that its tokens could be classified as unregistered securities.

Shortly after, XRP’s price took a nosedive as crypto exchanges began delisting it left and right. Despite its recent rally back to around $0.5, XRP still falls short of the $0.6 level it was at in late December.

“XRP encountered well-documented problems with the SEC and got de-listed from several big exchanges. This makes it harder for retail investors to enter during the current bull run. Polkadot is liked a lot in Asia and sees more and more projects building on it resulting in more and more adoption,” pseudonymous JB87, a spokesperson of DeFi yield farming protocol Harvest Finance, told CryptoSlate.

Indeed, Cardano and Polkadot have been garnering a lot of positive sentiments lately—as well as DeFi in general.

“[The fact] that XRP, Cardano, and Polkadot are three of the largest projects in the cryptocurrency space should demonstrate to everyone that there are yet no incumbents in the field. The aforementioned three are very far from being platforms suitable for mass-adoption. As such, at this early stage, there’s ample chance for any innovative and well-liked project to succeed,” they added.