End-to-end encrypted, onion-routed, censorship-resistant, peer-to-peer chat messages have been built on top of the Lightning Network. 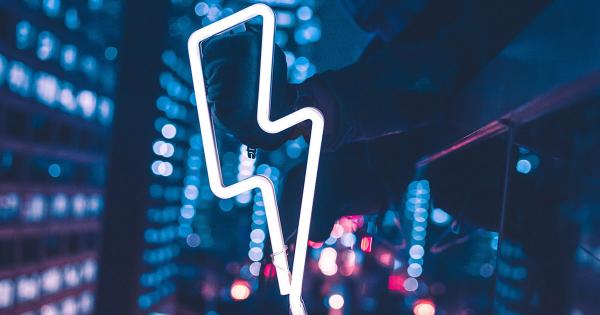 End-to-end encrypted, onion-routed, censorship-resistant, peer-to-peer chat messages have been built on top of the Lightning Network. Created by Lightning Labs engineer Joost Jager, the secure chat is currently still in the demo version but has the potential to become a service if no major changes to the Lightning protocol are made.

Governments cracking down on user privacy has become a prevailing problem in the past few years. The tightening regulatory grip over freedom of speech has forced messaging apps either to sacrifice the data of their users to continue to operate or exist in a legal grey zone.

Jager said that the world was in need of a censorship-resistant chatting and instant messaging over Lightning has the potential to become a killer application. 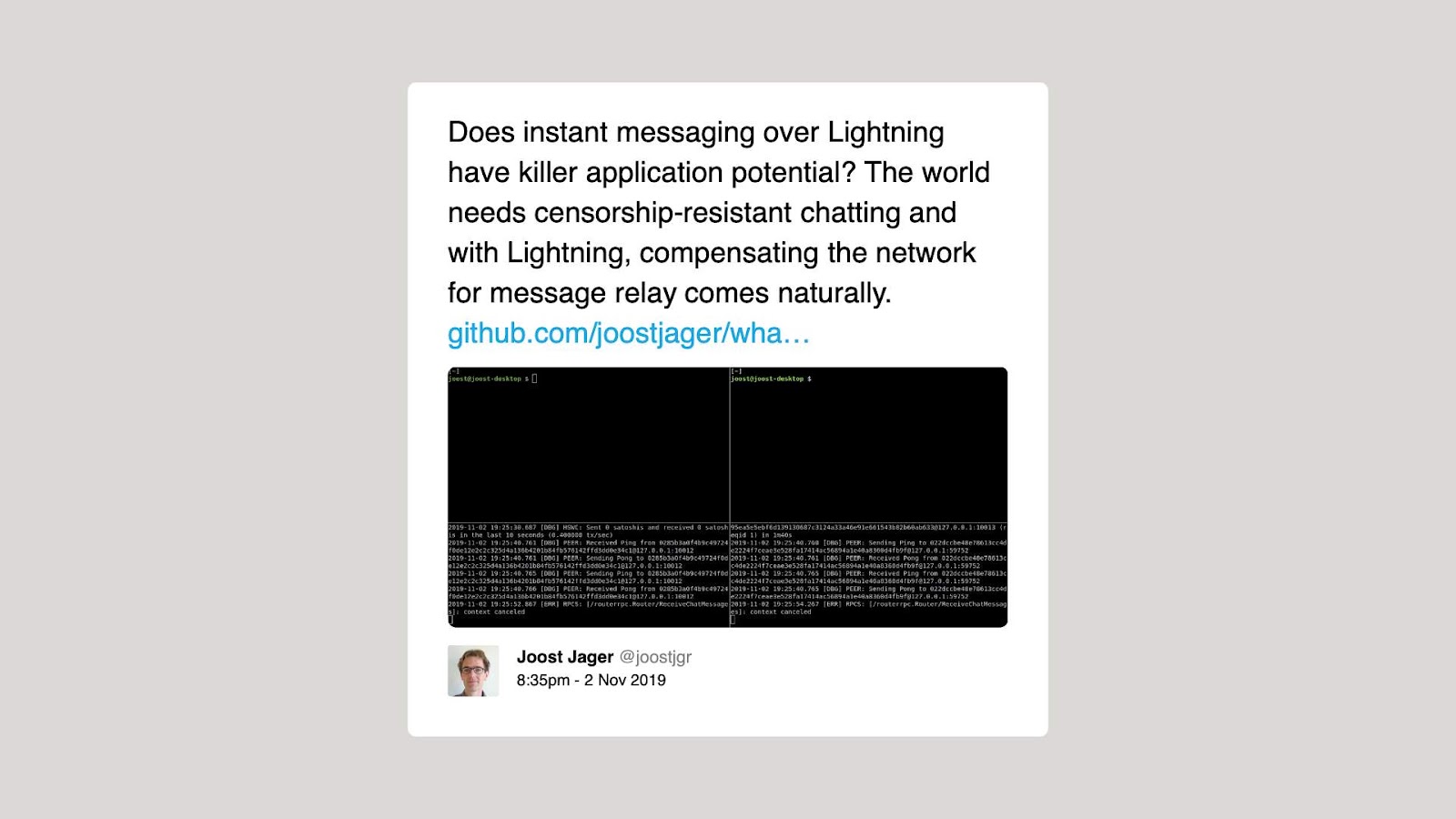 Changes in Lightning protocol enable messages to be sent for free

In his GitHub commit, Jager explained that recent changes to the Lightning protocol have made it easier to attach arbitrary data to a payment.

The developer then created a demo that leverages this by attaching a text message and a sender signature to a transaction on the Lightning Network. The network then delivers the message as it would any other transaction, but no money is paid either by the sender or the receiver.

Jager explained that the sender uses a random payment hash every time a message is sent so that the receiver can’t settle the payment. As every unsuccessful transaction generates a failure message, that message is returned to the sender and serves as a confirmation that the outgoing message was delivered.

This back-and-forth between the sender and the receiver can go on indefinitely, which means that chatting is completely free.

However, Jager noted that as this is essentially exploitation of a “bug” in the protocol, there is a possibility that these “free failures,” as he calls them, won’t be able to exist. He expects that nodes will either begin limiting sources that produce too many of these failed payments or start charging a prepaid relay fee. He explained in the GitHub post:

“In that case, chatting over Lightning may switch to actually settling the messaging payments and dropping off a few millisats at every hop.”

While this is still just a demo, the crypto community has welcomed the possibility of such a service existing. In a Twitter post, Jager asked his followers how much would they be willing to pay for the ability to send private, encrypted messages over the Lightning Network, with most saying a yearly fee for such a service should be between $10 and $25. 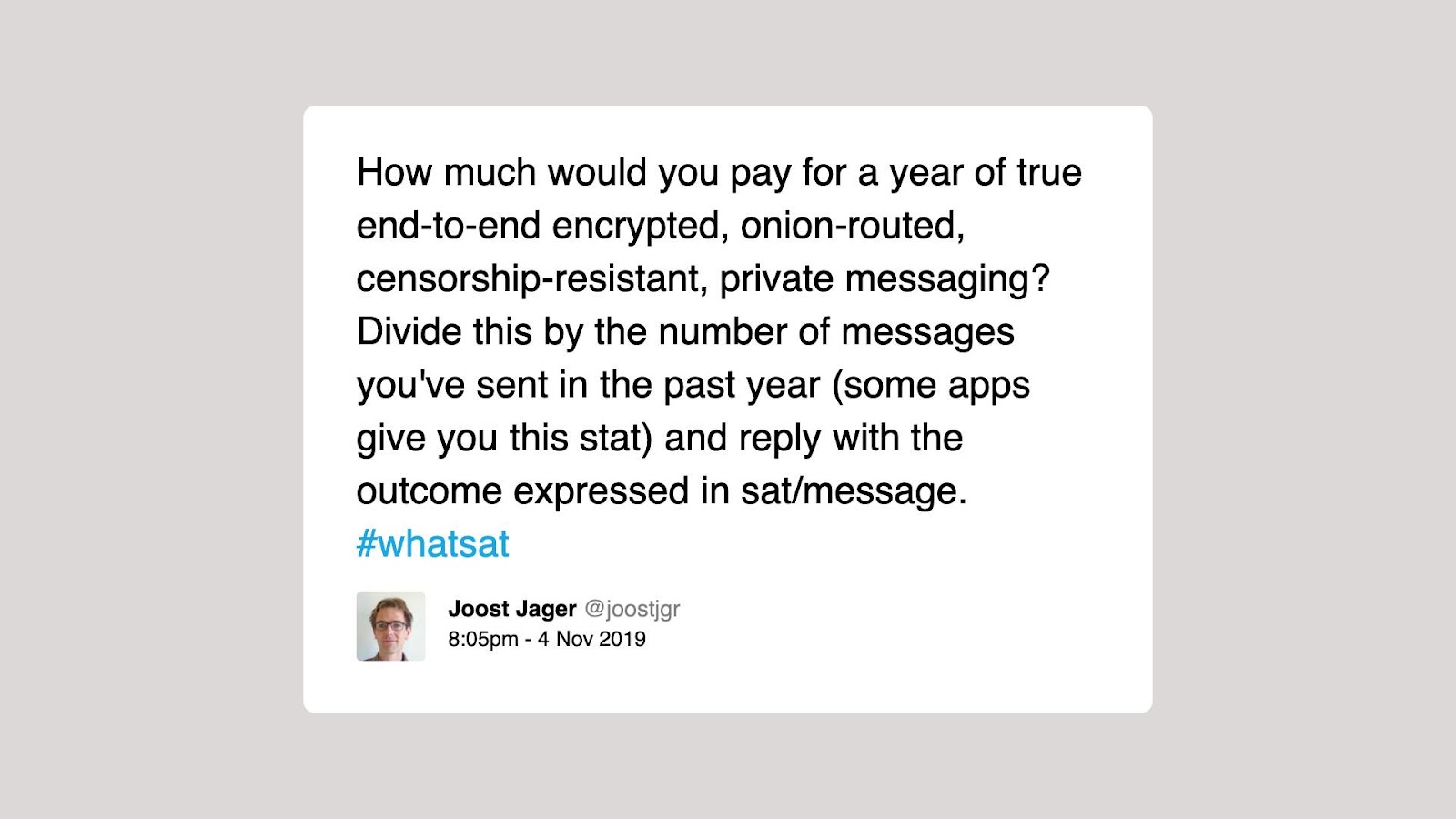 Next release of Electrum wallet to support Bitcoin lightning payments