Brazilians bought over $4 billion worth of crypto in 2021

Investors in Brazil traded more Bitcoin than any other crypto when the flagship digital asset touched its ATH of $65,000 in May. 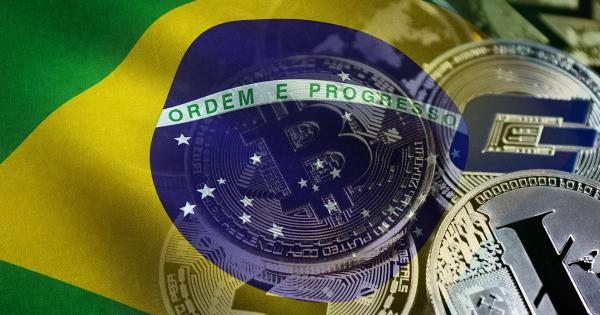 Photo by Roger Brown from Pexels and by JoeBamz from Pixabay

Brazil’s Central Bank has released data showing that its citizens have spent a total of $4.27 billion on cryptocurrency alone since the beginning of the year.

Brazilians bought Bitcoin at its peak

Per the data, investors in Brazil traded more Bitcoin than any other crypto when the flagship digital asset touched its ATH of $65,000 in May. It was revealed that during this month, around $756 million was spent on the purchase of cryptocurrencies.

Speaking of other months, crypto investors in Brazil spent around $400 million on crypto investments in January, $357 million in March while spending an almost identical amount in the remaining months.

While the bank did not state why the country’s citizens were investing heavily in crypto, one of the reasons could be tied to the effects of the coronavirus pandemic on the economy of the country which led to the debasement of the national currency.

Apart from that, crypto provides a viable access to financial services for the unbanked, thereby promoting financial inclusion. It is also a known fact that the youth across many countries in the world have been driving crypto adoption within their region, and Brazil is no different.

Recently, the legislative arm of the Brazilian government hinted that they might be interested in approving a crypto-friendly bill in the nearest future. The legislators have, however, denied that they would be making Bitcoin a legal tender like El Salvador.

Instead, it appears that they are more interested in presenting a bill that would make crypto investments easier for the citizens whilst punishing those who might look to defraud noobs in the space.