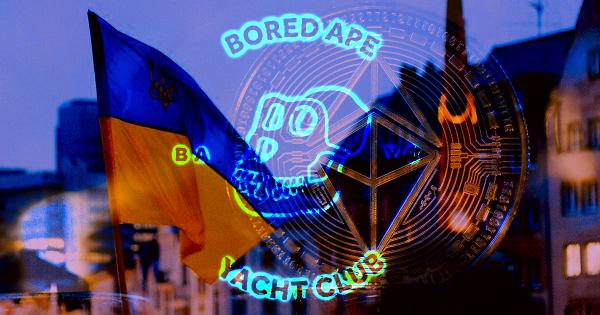 As the conflict between Ukraine and Russia continues, the crypto community support for Ukraine has also been growing. On Tuesday, the popular NFT collection, Bored Apes Yacht Club, donated $1 million to the official Ethereum address of Ukraine.

According to the community, after seeing several members of its community donate almost $1 million in support of Ukraine, it has decided to match that by donating $1 million.

The collection shared the etherscan of the transaction worth 388.99 ETH, slightly above a million by the current value.

It's been inspiring seeing our community come together in support of Ukraine – almost $1m in ETH has been donated to @Ukraine by wallets containing a BAYC ecosystem NFT. Today we're matching that with a $1m ETH donation of our own. 🦍♥️🇺🇦

The donation of BAYC continues the trend of crypto donations in support of Ukraine that has surpassed $88 million. Several crypto and Web3 communities, from DAOs to memecoins, have donated generously to Ukraine’s efforts to defend its territorial integrity. Etherscan shows that its Ethereum wallet currently holds over $7 million.

As the second most valuable NFT collection, BAYC has become a cultural phenomenon. Its NFTs are held by some of the most popular celebrities in the world, from Justin Bieber to Steph Curry, and it has done more than a billion dollars in secondary sales despite not being up to a year since launch.

While Ukraine continues to receive donations in millions, it’s a different story in Russia. Available data shows that Russians are actively investing in cryptocurrency despite the sanctions.

The average trade size for Ruble and Hryvnia-denominated pairs spiked following the invasion, but remains below all time highs, suggesting retail activity. pic.twitter.com/p56yhfYOfR

According to crypto analytics firm Kaiko, the trading volume for ruble-denominated Bitcoin reached its highest level for the year last week.

The majority of this volume is concentrated on Binance, which recently announced they would not block Russian accounts. pic.twitter.com/lDuQaEGAyA

It also appears that most ruble-denominated crypto trading is going through USDT. This suggests that more investors in the country favor BTC over fiat or stablecoin exposure.

Meanwhile, Ukrainian authorities have criticized cryptocurrency exchanges for refusing to discontinue their services for Russian users.

While reiterating the call for a blanket crypto ban on Russia by the exchanges, Ukraine deputy minister of digital transformation, Alex Bornyakov, told Reuters that the public should boycott these crypto firms.

He echoed the views of several others by stating that the ban is necessary to prevent Russia from evading economic sanctions. But most crypto exchanges disagree with a blanket ban.

Coinbase recently announced that it had blocked 25,000 wallet addresses believed to be connected to Russian entities and individuals involved in illegal activities. However, it has refused to place a blanket ban on the country.

Other popular exchanges such as Kraken and Binance have also adopted a similar stance. According to Binance CEO Changpeng Zhao, such a blanket ban is unethical.

Uniswap Labs acquires Genie to integrate NFTs into its products