Bitfinex CTO Paolo Ardoino talks to CryptoSlate about Volcano Tokens, including time frames on when the process can move forward. 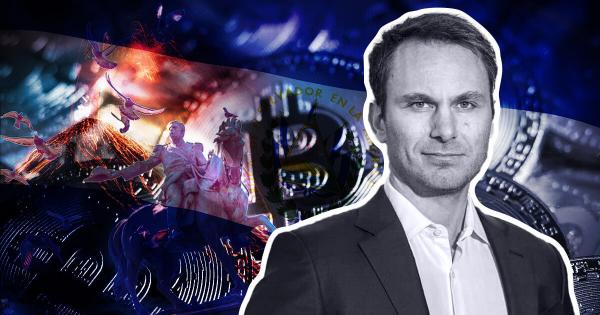 Europe’s biggest conference, the Paris Blockchain Week Summit (PBWS), ran for two days last week from April 13. It featured over 3,000 attendees and 250 speakers, including some of the most prominent industry figures.

Speaking to CryptoSlate at PBWS was Bitfinex and Tether CTO Paolo Ardoino, who talked to us about a myriad of topics. But most interesting of all was the matter of Volcano Tokens, which may be the most significant development in El Salvador since Bitcoin became legal tender.

El Salvador is leading the way with Bitcoin adoption

El Salvador made history last September as the first country to make Bitcoin legal tender. The move was opposed by numerous bodies, most notably by the International Monetary Fund (IMF), which questioned whether BTC as a national currency was a step too far.

Nonetheless, President Bukele remains committed to the “experiment,” demonstrating this by buying the dip when the opportunities arose.

An often pondered issue is how Bitcoin will mature into both a store of value and a transaction mechanism. At present, considering the nascent development of cryptocurrency in general, there are no firm answers.

However, considering what’s happening in El Salvador, namely the widespread use of BTC to transact via the Lightning Network and the emergence of Volcano Bonds, we get to see how this will play out in real-time.

More about the Volcano Token

El Salvador’s Bitcoin-backed Volcano Bond is revolutionary in that it’s the first tokenization of a sovereign bond. The ramifications of this cannot be overstated enough, as the Volcano Bond will bypass TradFi to issue debt via cryptocurrency rails.

Currently, there are several obstacles stopping things from moving forward. This includes the granting of legislative approval, and, as a side note, considering the U.S Bitfinex/Tether ban, the processes in place to stay on the right side of U.S regulators.

As expected, we want to find out more. So, what better way to shed light on things than to hear directly from the Bitfinex CTO.

CryptoSlate: Can you give an introduction to Volcano Tokens (VT) and explain how they would work with Bitcoin and the Lightning Network?

Paolo Ardoino: The VT and LN are not really linked. So the LN is an efficient payment system built on top of Bitcoin, that will make payments on Bitcoin extremely cheap and make them extremely scalable. So that is probably the best technology among all the other blockchain-based technologies to scale the blockchain use of payments.

So LN, if you think about it, is the solution to enable micropayments at the national level, local level, it’s a peer-to-peer solution… And eventually, there is a settlement that happens on layer 1, that is Bitcoin.

But the VT is just their capital raise for their sovereign debt. This VT is, in a way, similar to a bond but will have a different structure likely… But you can imagine that this token is a simplified version of a debt instrument that will give access to a component to the users.

On the other side, with the money, the $1 billion that the El Salvador government will raise, this money will be used in halves. Half a billion dollars will be used to buy Bitcoin, hold Bitcoin for five years, and after five years they will sell these Bitcoin for fiat and distribute half of the profit back to the [Volcano] token holders.

Half of the profit will be kept for infrastructure development. [This] will be used to expand the geothermal electricity production system they have around the volcano, to extract the heat from the ground of the volcano and they transform it into energy and electricity.

And if you think about it, it’s the perfect moment, we have discovered the hard way, even in Europe, how electricity now is a new gold, right? Electricity is rare. And we have to invest wealth into having sources of electricity.

CryptoSlate: The VT, what chain will that be on?

Paolo Ardoino: One of the important parts of the VT is that it’s a security, right? It will be traded by Bitfinex Securities. The President of El Salvador also confirmed on Twitter that they will use Bitfinex Securities as their technology company provider for their issuance of the VT.

The underlying blockchain on which this token will be issued will be Liquid, for the specific reason that Liquid has a whitelisting feature. Since this is going to be a security, you really don’t want this token to be traded on DEXs because there is a strong KYC and AML requirement from regulators. Of course, we have to exclude certain jurisdictions.

CryptoSlate: You mentioned that there are still some laws to be passed, within El Salvador, in order to get the VT to go through, given that El Salvador is quite crypto-friendly, do you see this as being a potential difficulty?

Paolo Ardoino: I don’t think it’s a difficulty. I think that the government has announced in the past weeks that they have 52 new laws that they want to pass. So one after the other. My understanding is that they are going to [inaudible] Congress and discuss these laws.

To my understanding, in the next two to three weeks it’s likely that this law will be evaluated by Congress and potentially pass. So, it’s a matter of weeks potentially, I don’t think it will be several months, it’s in a way around the corner.

After the law is passed then Bitfinex Securities can apply for a license in El Salvador. After we get the license, if we get the license, of course, we can offer our platform as the technology company for the El Salvador government to issue this token so that then, all Bitfinex users can apply for Bitfinex securities, and once they get through with securities they can participate.