Clients of some sanctioned Russian banks are unable to deposit fiat or buy crypto on Binance. 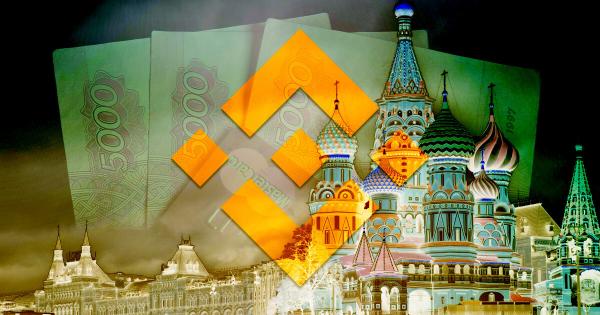 Some Russian users trying to deposit fiat or purchase digital assets on crypto exchange Binance stumbled upon a warning message today, informing them that local bank cards are currently not supported.

“Please be informed. We currently do not support the bank cards issued in your country,” said the message.

On the bright side, the exchange has also stated that it is already “working on making this a possibility as soon as we can.”

Notably, Binance Russia’s support channel in Telegram as well as its official Twitter account has not posted any corresponding announcements yet. On the contrary, the exchange’s Telegram administrators are claiming that “as of now, Binance is operating normally.”

Similarly, a spokesperson for Binance Russia told CryptoSlate that “it must be some kind of error.”

“Nobody blocked anything,” they replied to an inquiry. “This is likely some kind of error. If we change something, we inform [our users].”

CryptoSlate was able to confirm that cards issued by Sberbank (one of the institutions that were targeted by various western sanctions recently) are being turned down by Binance.

On the other hand, some users also reported that cards issued by Tinkoff, for example, are unaffected by the disruption of service. Notably, no sanctions have been imposed on this Russian bank so far.

As CryptoSlate reported earlier, numerous sectors of Russia’s economy are currently in a downtrend following the country’s invasion of neighboring Ukraine.

Over the weekend, several countries (i.e., the U.S. and several EU members) announced strict economic sanctions against Russia which, among other things, will preclude some local banks from accessing the Society for Worldwide Interbank Financial Telecommunications.

While these sanctions were “picked carefully” to avoid the German energy crisis, Russia’s economy is already feeling its effects. As ruble collapses, some users are reportedly paying up to $20,000 above the market rate to buy Bitcoin.