Binance commits $500 million to invest in Twitter with Elon Musk 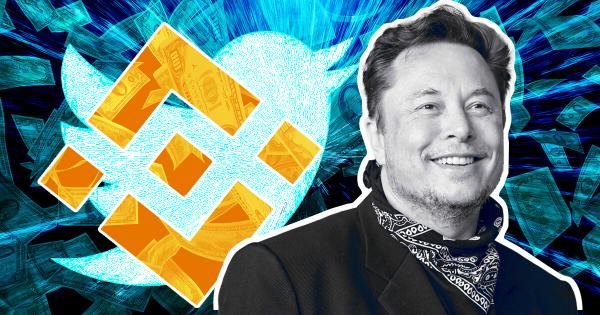 According to data submitted by the US Securities and Exchange Commission, major crypto exchange Binance participated in Elon Musk’s $44 billion purchase of Twitter.

On May 5, Musk filed a revised general acquisition statement, indicating that Twitter had acquired new finance commitments totaling $7.2 billion in conjunction with the merger deal, subject to the terms of co-investor equity commitment agreements.

Binance is one of 18 co-investors in the transaction, among prominent crypto industry giants like Sequoia Capital Fund and Fidelity Management and Research Company, according to the statement.

Binance is the fourth largest donor, with $500 million, behind Lawrence J. Ellison Revocable Trust, which put in $1 billion. Sequoia Capital and VyCapital each contributed $800 million and $700 million.

After the file was made public, Binance CEO Changpeng Zhao turned to Twitter to describe the company’s investment as a “small contribution to the cause.”

A small contribution to the cause. https://t.co/xD9XZxOWfL

Each of the document’s named equity investors has promised to contribute before or shortly before the acquisition’s conclusion.

Elon Musk, the billionaire CEO and creator of Tesla, announced the $44 billion purchase of Twitter on April 25, with the deal slated to completion in 2022, pending clearance from Twitter investors and authorities. He previously said that removing “spam and scam bots and the bot armies,” including those tied to cryptocurrency, will be one of his primary goals for Twitter.

It is worth mentioning that, although Binance’s desire to give financial backing for Musk’s Twitter takeover may come as a surprise to some, Musk has been a vocal supporter of the cryptocurrency sector for quite some time.

On multiple occasions, Musk has stated his support for Bitcoin (BTC) and Dogecoin (DOGE), and he is widely regarded as one of the industry’s leading cryptocurrency proponents.