Binance becomes first crypto firm to collaborate with the mainstream music industry via its partnership with the GRAMMYS. 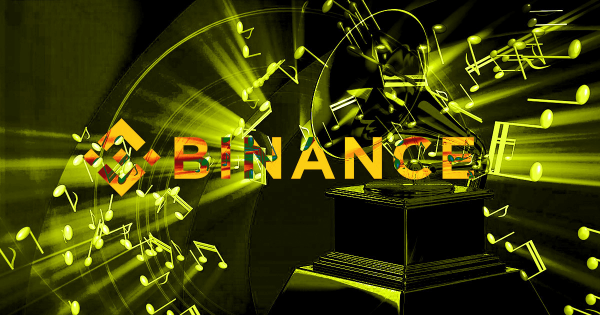 Binance announced on April 1 that it has signed a partnership agreement with the Recording Academy to become the first cryptocurrency exchange partner of the 64th GRAMMY Awards.

The award ceremony is slated for April 3rd. Binance will also act as a partner for GRAMMY® Week events, including the inaugural Recording Academy Honors celebration, according to the announcement.

“Starting with the GRAMMYs, we are excited to work together with the Recording Academy to bring fresh new experiences powered by blockchain and all the great things Web3 technology can bring to entertainment.”

Binance co-founder Yi He said about the partnership. The world’s largest crypto exchange by trading volume added that further details of the partnership will be announced sometime in the future. It is likely that the company will release more information once the event begins.

Meanwhile, Recording Academy Co-President Panos A. Panay said the crypto exchange was the “perfect partner” for the organization to further its goals of empowering people involved in the music industry around the world.

Binance and various other crypto exchanges have been on the warpath of marketing in recent months, signing partnership and sponsorship deals worth millions of dollars across the globe.

Binance in particular has been targeting multiple industries to push its brand to a wider audience. The GRAMMYS are the second music-related organization the company has entered into a partnership with. In February, the crypto exchange sponsored the seventh season of Nigerian Idol.

A few days earlier, the company purchased a $200 million stake in Forbes magazine to get two of the seats on Forbes’ board of directors, which totals nine people.

Invest in both new and old, and bridge them with crypto.

Binance has also been pushing into the sports industry, especially through soccer which is the most popular sport in the world, in an attempt to reach the billions-strong fanbase. The company recently signed an agreement to sponsor the Argentine Football Association and help it issue a fan token.

In January 2022, the crypto exchange signed a deal to become the official sponsor for the Africa Cup of Nations 2021. Meanwhile, world-renowned soccer club FC Barcelona tweeted in the same month that Binance was the main candidate to become the next main sponsor of its shirt, having helped the club create a fan token previously.

Binance is the main candidate to become Barcelona's main shirt sponsor for next season. The club are looking for €70m and a 4 or 5 year contract.

However, at the end of February FC Barcelona rejected Binance’s offer, citing a lack of confidence in the crypto sector.