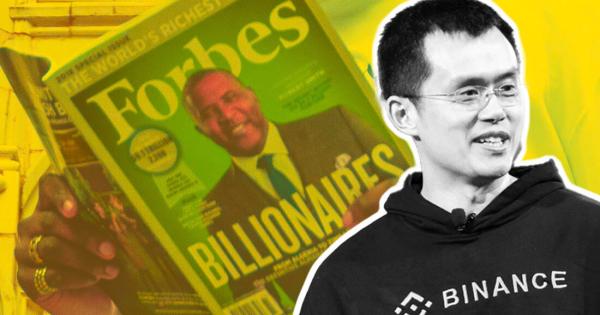 The investment will help the 104-year old magazine and digital publisher to go public–merging with a publicly-traded special purpose acquisition company, or SPAC.

Two Brinance directors at the nine-seat board table

Binance’s stake in Forbes only confirms the obvious–crypto’s push into the mainstream is at full throttle.

With Binance’s $200 million stake representing a half of $400 million in commitments from institutional investors that were previously announced by Forbes, the crypto giant secured its two seats at the Forbes Board of Directors table of nine.

According to the announcement, Patrick Hillmann, Chief Communications Officer for Binance and Bill Chin, Head of Binance Labs, the Venture Capital Arm and Incubator of Binance, will join the board upon the successful closing of the business combination transaction, expected this quarter.

“With Binance’s investment in Forbes, we now have the experience, network and resources of the world’s leading crypto exchange and one of the world’s most successful blockchain innovators. Forbes, already a resource for people interested in the emerging world of digital assets, can become a true leader in the field with their help,” added Federle.

“Invest in both new and old, and bridge them with crypto”–Binance Founder and CEO  Changpeng ‘CZ’ Zhao, summed up his strategy in a short tweet.

“As Web 3 and blockchain technologies move forward and the crypto market comes of age we know that media is an essential element to build widespread consumer understanding and education. We look forward to bolstering Forbes’ Digital initiatives, as they evolve into a next-level investment insights platform,” according to CZ.

This time last year, Binance dropped a lawsuit against Forbes.