An Ethereum (ETH) to Fantom (FTM) NFT bridge is coming

The brand new contract will help bridge the gap between Ethereum and Fantom, allowing users to seamlessly transfer NFTs from one blockchain to the other. 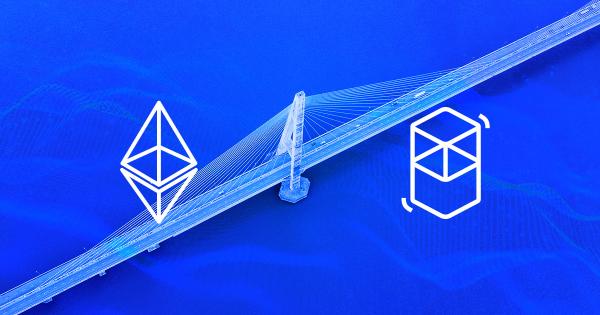 Andre Cronje, the creator of yearn.finance and Keep3r Network, is working on launching an ERC-721 NFT token bridge from Ethereum to Fantom.

The popular developer shared a screengrab of the upcoming bridge’s architecture and deployment schedule on Twitter, revealing only that it will be built in collaboration with Anyswap.

Bridging NFTs from Ethereum to Fantom

According to the screengrab shared by Cronje earlier today, the ERC-721 ETH-FTM token bridge will consist of three main parts—an NFTRouter contract, NFT Bridge nodes, and a multichain MPC network.

The NFTRouter contracts will be deployed both on Ethereum and Fantom alongside the NFT Bridge nodes.

To initialize the NFT token transfer from one blockchain to another, the ETH token project owner will have to deploy the same mapping NFT token contract used on Ethereum on Fantom. The owner of the Fantom NFT will then transfer the token to the NFTRouter contract on Fantom and start the bridging process.

Cronje’s screengrab revealed that the upcoming bridge will work just like any other similar infrastructure—after depositing and locking Ethereum NFTs into the Ethereum NFTRouter contract, the NFT bridge MPC nodes will verify the tokens and call on the Fantom NFTRouter contract to transfer the tokens. The process will work the same vice-versa, providing users with a seamless way to move their NFTs across the two blockchains.

The transfers require zero fees and take seconds to complete.

While Cronje didn’t provide any additional information about the token bridge, his announcement was retweeted by Anyswap, confirming that it was also collaborating on the project.

The announcement quickly gained traction on Twitter, with many members of the Fantom community seeing this as an incredibly bullish development for the FTM ecosystem.