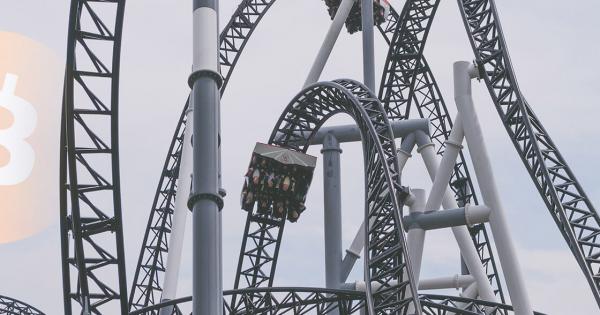 “With three weeks of sideways and the Bollinger Bands starting to pinch, Bitcoin price could see some volatility soon Good news is that the price is above the 20-day MA for the first time in a month.”

Although BTC seemed to be demonstrating signs of a breakout to the upside, it has failed to remain above a key resistance level at $8,450, which could indicate a further pullback to lower support levels.

Volume struggles to recover as bitcoin gears towards a bearish trend

In the last 24 hours, the bitcoin price increased from around $8,220 to $8,460 in an extended upside movement, hinting a strong breakout above $8,450, which has served as a crucial level of activity in the past several weeks.

Almost immediately after the bitcoin price slightly surpassed $8,450, it showed steep rejection to the downside, closing the daily candle in red.

On BitMEX, the most widely utilized margin trading platform for cryptocurrency traders, the daily volume of bitcoin was hovering above $10 billion from June to July on peak days.

In the past two months, the daily volume of BTC on BitMEX has generally declined to around $2 to $4 billion.

A declining volume could imply two things: it could mean that the demand for the asset is on the decline or the sell pressure on the market is low enough for it to be reversed in the short term.

As such, traders like DonAlt have emphasized that if the bitcoin price breaks above $9,500, a high resistance level, it could lead to a proper reversal for the dominant cryptocurrency.

No impact from the equities market

Up until late September, strategists like Fundstrat’s Thomas Lee said that the trend of the bitcoin price is heading to the upside, citing strong fundamentals of bitcoin, adding that a strong rebound in the equities market could trigger a BTC rally. He said at the time:

“I think the next big catalyst is a decisive breakout in the equity markets. I think when equities break through all-time high, bitcoin becomes a risk-on asset.”

Following the agreement of a mini trade deal between the U.S. and China, the U.S. stock market has recovered with momentum, as the Dow Jones added over 300 points in a single session.

Bitcoin remains unaffected by the boost in the equities market, which suggests that the sell pressure on the market has intensified.

A number of technical indicators are signaling that the entire market is susceptible to a downturn over the next few days, or even hours.