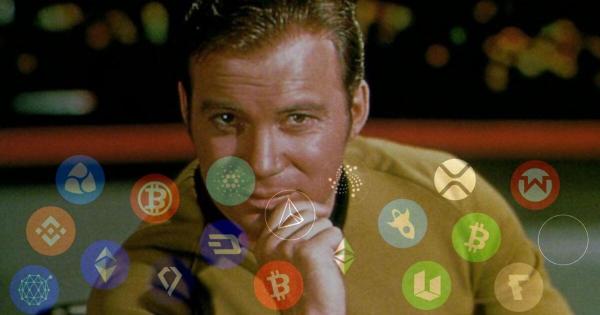 Actor William Shatner, best known for his portrayal of Captain Kirk in the Star Trek franchise, is the latest celebrity to join the crypto bandwagon. Currently considering creating his own crypto-focused podcast, Shatner doesn’t shy away from sharing his thoughts on the industry—including labeling Craig Wright as a fraud.

While there’s no lack of crypto-focused podcasts and shows on the internet today, the community seems to value anything that puts the word about the industry out there—especially if it might come from Captain Kirk himself.

William Shatner, the legendary Canadian-born actor best known for his decades-long portrayal of Star Trek’s Captain Kirk, is considering creating and hosting his own podcast.

According to his Twitter account, the renowned actor wants to use his platform to spread the word about cryptocurrencies and blockchain technology.

The news about Shatner’s podcast plans spread like wildfire on Twitter. The crypto community first became infatuated with the actor after he announced that he participated in the Satoshi Roundtable conference earlier in February.

If Shatner does decide to launch his own crypto podcast, the topic of cryptocurrencies could get invaluable exposure. Shatner told his 2.5 million Twitter followers that he doesn’t plan on shilling particular coins or products, but that he’d love to discuss the potential of blockchain technology and the industry in general.

Shatner’s recent popularity among the crypto community was bound to hit a roadblock, this time in the form of Craig Wright. The topic of Wright came about in one of Shatner’s discussions on Twitter when he was asked whether “Faketoshi” attended the Roundtable conference.

To the dismay of the BSV community, Shatner used the opportunity to denounce Wright and question the validity of many of his claims. Shatner said about the nChain scientist:

“Why can’t he prove it? From what I’ve read is that some mysterious bonded courier would deliver the keys (which honestly is a scene right out of Back to the Future.) If he is, he should be able to prove it. This is like the modern-day search for Anastasia.”

Calvin Ayre, the CEO of Ayre Group and founder of pro-BSV news outlet CoinGeek, also gave his two cents on the matter, telling Shatner that Wright “can prove everything” and has “all the evidence.”

“He owes us all nothing in this and having keys is not proof like what he is doing in court,” he wrote on Twitter.

The discussion quickly turned into a bitter fight between those supporting Wright and those that believe he is a fraud. Shatner, who was at the receiving end of a lot of criticism from the BSV community, made sure his opinion on the matter was crystal clear—there’s little to no chance Wright is actually Satoshi.