5 launchpads to look out for in the crypto space

Launchpads are becoming more popular in the crypto space. They have grown in popularity due to the perks given to early investors. 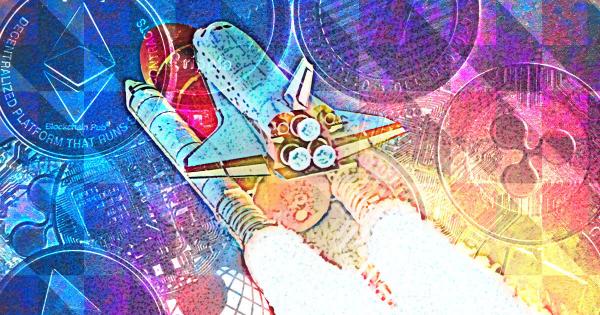 In the world of cryptocurrency, launchpads are becoming increasingly popular. They address a unique challenge for both crypto-investors and developers and have gained a lot of popularity as a result of the benefits they provide.

Although the launchpad phenomenon is increasingly typical among cryptocurrency experts, the majority of people have no idea how launchpads work and their intended uses.

What is a Crypto Launchpad? How do they Work?

Launchpads are incubation platforms that enable blockchain projects to raise capital via crowdfunding. These platforms also enable users to buy into crowdfunded projects at a low price due to being early investors.

Projects can use launchpads to raise funds through different methods including:

Token sales are conducted through centralized exchanges, users usually deposit a certain amount of tokens (USDT or ETH for example) and then get the crowdfunded projects tokens in return.

Like IEOs but done through a decentralized exchange (DEX), users usually stake the platform’s native token for a certain period to gain an allocation or receive the project’s tokens in return.

This system is similar to IDOs, instead, users usually receive in-game NFT items in return for investing in an incubated project.

In this post, we’ll be looking at five promising launchpads to look out for.

Bybit Launchpad is a crowdfunding platform that gives investors early access to new and pre-listed tokens from blockchain-based projects. Users must stake the platform’s native token BIT towards each project to participate in a crowdfunding round.

Launchpad project on the platform goes through four steps:

To take part in a launchpad crowdfund, users need to complete an identity verification process via the Know Your Customer (KYC) protocol.

Alpha Launchpad is a crowdfunding platform that was launched by Alpha Labs as part of their Alpha Venture DAO platform and community. The Alpha Venture DAO is a completely decentralized venture capital fund that aims to challenge the current Web3 financing model.

Members of the Alpha community may contribute their knowledge and talents to help all incubated ideas progress and, as a result, become owners of futuristic companies before they are released on more mainstream markets.

Alpha Finance Lab aims to provide end-to-end assistance and mentorship to Web3 projects through its newly created decentralized autonomous organization (DAO). These activities will be overseen and participated in by Alpha Venture DAO’s partner Terraform Labs and a group of more than 50 Web3 thought leaders, influencers, and investors.

In addition to receiving advice from industry professionals, all Web3 initiatives fostered by the Alpha Venture DAO will have access to Alpha’s expanding network of over 100,000 Web3 users.

Selected incubated projects will work with the Alpha team to launch and build their Defi initiatives after passing a stringent screening procedure. Product-market fit, tech consulting, and assistance with the funding process are examples of areas where projects may get hands-on expertise, coaching, and guidance.

UpLift DAO is a fully decentralized and permissionless platform for token sales and exchanges. It provides possibilities to develop, launch, and advance DeFi-related projects.

UpLift DAO works via an open governance architecture that allows the community to make strategic decisions about the platform’s operation. Staking incentives, airdrops, and a token buyback mechanism are all ways that gains are returned to the community.

The platform has a community with members from over 80 countries. When projects join the UpLift ecosystem, they are incubated and supported throughout the whole cycle, including legal assistance, community building assistance, and access to UpLift’s network of partners.

Without using a tiered allocation structure, UpLift allows the community early access to upcoming tokens. Instead, they employ a lottery mechanism that picks individuals at random. Additionally, following each IDO, there is a stand-off time to ensure a broad group of participants and equitable allocation.

UniX Gaming is a gaming community and platform with the goal of becoming the largest gaming guild in the Play-to-Earn sector. The IGO Launchpad platform is presently being developed by the platform.

The UniX launchpad is being created to provide members of their community early access to some of the most recent AAA games before they are released to the wider public. Members of the community will have varying degrees of access to the launchpad depending on how many UniX tokens they have staked.

There will be five separate categories in the tier system:

The tier system is designed to reward members based on their efforts, so those who have staked more will be paid more, allowing the community to benefit fairly from this milestone.

Users get everything from the early access version of the game, including NFT drops, gear, and items, as well as two additional incentives. Legendary members will gain access to the NFT treasury and a private chat with the game’s creators.

Polkastarter is a decentralized crowdfunding platform allowing blockchain teams and businesses to fund and launch their initiatives. It enables projects to construct multi-chain token pools while also generating revenue and fostering community growth.

POLS is the utility and governance token for the platform. Users must own or stake POLS to increase their POLS Power to participate in an IDO on Polkastarter.

Polkastarter supports many blockchains and has cheap transaction fees, allowing new projects to be launched across numerous blockchains. Ethereum, BNB Chain, Polygon, Celo, and Avalanche are among the supported blockchains.

During Initial Dex Offering (IDO) sales, launchpad projects can accept any tokens that are compatible with Polkastarter’s supported networks.

POLS is the Polkastarter ecosystem’s utility token. The token is available on both the Ethereum and Binance Smart Chain (BSC) networks.

POLS is a governance token that allows its holders to vote and propose recommendations for Polkastarter’s development and growth. Proposals for additional features, token use cases, which projects are listed on the platform, and other topics are among the proposals that can be voted on.

Crypto launchpads are unquestionably a departure from the usual fundraising model, which is generally characterized by a lengthy and rigorous procedure. New businesses may now raise millions of pounds in a matter of minutes, with high returns for early investors.

However, the comparatively simple nature of these fundraising techniques is not without danger, and investors must do due research and consider their risk appetite before investing.

Barriers to mass adoption: How can the crypto industry attract retail investors?