Why Is Bitcoin Dropping and Will Next Week’s Consensus Event In New York City Turn It Around? Shiraz Jagati · 4 years ago · 3 min read
News › New York› Bitcoin › Adoption

Why Is Bitcoin Dropping and Will Next Week’s Consensus Event In New York City Turn It Around?

After hitting a low of $6,850 earlier this year, Bitcoin experienced a resurgence in the past month as prices climbed back to $9,950. 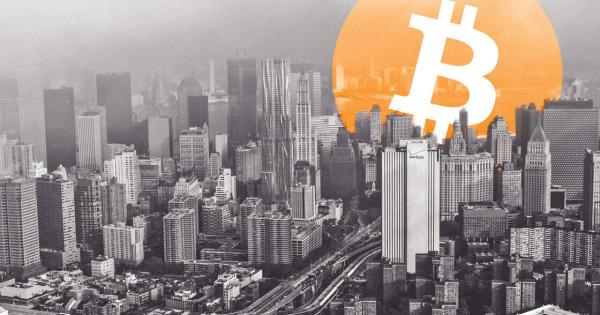 After hitting a low of $6,850 earlier this year, Bitcoin experienced a resurgence in the past month as prices climbed back to $9,950. According to Tom Lee, Head of Research at Fundstrat, the intrinsic weakness of currencies like Bitcoin lies in the fact that investors have to keep selling their virtual holdings in order to “raise cash to pay for their 2017 gains.”

While it’s impossible to predict why exactly this past week’s crypto drop occurred, some have attributed it to the comments made by business magnates Warren Buffett and Charlie Munger at the annual Berkshire Hathaway shareholder meeting, where they criticized Bitcoin and other virtual assets — likening them to “rat poison.”

After falling to just over $9,300 last weekend, the crypto powerhouse remained relatively stable for a few days until it dropped to $8,320 yesterday.

In the midst of this latest price drop, Lee believes that the upcoming Consensus 2018 Conference — scheduled to take place in New York City between May 14 – 16 — will help the crypto sector rebound and once again display strong bullish signs.

Another reason for the Bitcoin dip may have been due to the recent raid of Upbit, South Korea’s largest cryptocurrency exchange by volume.

According to a respected Korean news outlet, Chosun, ten financial investigators visited Upbit’s Gangnam-gu office after they were notified of certain fraudulent activities that the trading platform had been involved with.

The prosecution claims that Upbit is “deceiving their customers” and is falsely portraying currency holdings that they do not actually own, primarily by faking their balance sheets.

Data from CoinMarketCap shows that Upbit is the world’s fourth-largest cryptocurrency exchange by trade volume yet it accounts for less than 2% of Bitcoin’s total trading volume over the past 30 days.

Similarly, it is being reported that a Mt. Gox trustee is positioning to liquidate 8,200 Bitcoins to pay off previous investors from the 2014 hack that bankrupted the world’s largest Bitcoin exchange at the time.

While seeing such a large amount of BTC moving has alarmed crypto investors, besides having a physiological effect, this move should not have any major impact on the value of Bitcoin in the long-term.

Consensus 2018, a three-day conference dealing with all matters related to crypto and blockchain, starts on Monday of next week. The event is hosted by CoinDesk and boasts of over 250+ speakers along with nearly 7,000 attendees from a host of different industry startups and financial institutions.

Starting in 2015, the conference has morphed into a go-to destination for crypto enthusiasts from across the globe. This is reflected by its growing annual attendance, which has increased tremendously since its inception in 2015:

Tom Lee of Fundstrat is a long-time Bitcoin proponent and believes that post-Consensus 2018, the crypto market can expect to see some major financial action.

.@fundstrat's @rsluymer says history suggests next week's #Consensus2018 conference will be the next big catalyst for #bitcoin pic.twitter.com/whNUHyINeL

With this year’s edition of Consensus expecting its largest-ever audience of 7000+ attendees, Lee believes the crypto sector is primed to move even higher and break new ground.