With over 1300 cryptocurrencies and a never-ending supply of new ICOs, it can be next to impossible to stay up to date with new projects, let alone the established ones. 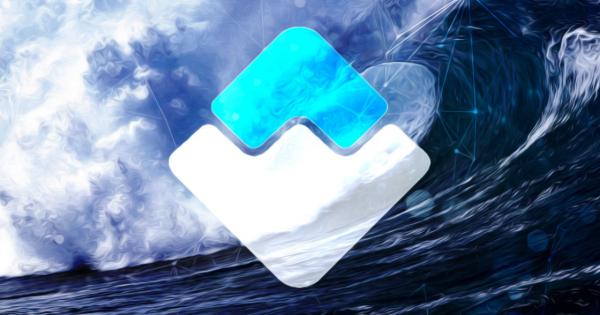 With over 1300 cryptocurrencies and a never-ending supply of new ICOs, it can be next to impossible to stay up to date with new projects, let alone the established ones. While most cryptocurrency investors have probably heard about Waves, it may not be one everyone is completely familiar with.

Waves is a blockchain and cryptocurrency that was launched in 2016. The network aims to make creating, managing and storing digital assets easy and secure whilst opening up the advantages of blockchain technology to the wider world.

Accompanying the native currency, Waves, users can simply create new tokens in order to operate ICO and crowdfunding projects. The platform is also working to break barriers between fiat and cryptocurrencies with gateways that connect banks to the blockchain.

With the ability to run ICOs and smart smart contracts, some have drawn comparisons to the Ethereum network but similarities to Kickstarter, thanks to the crowdfunding abilities also become apparent.

Gaining nearly $1.5 billion market cap since its release, Waves originally funded via an impressive $16 million ICO. It is now one of the world’s top 30 coins with a total supply of 100 million that currently trades upwards of $13.

“Waves is a decentralized platform that allows any user to issue, transfer, swap and trade custom tokens directly on the blockchain.”

So how does the Waves platform work? Watch this short video (1:32):

Waves’ major unique selling proposition arrives in the form of custom token creation. On the platform, users develop their own digital tokens to issue, transfer, swap and trade directly on the blockchain.

Unlike its competitors, Waves makes it easy for anyone to create tokens without any previous coding experience or knowledge. In almost no time, new digital assets are available for creation backed by Waves. With just the Waves token, businesses, organizations and institutions can create their own tokens that contain a custom name, issue amount and number of decimal fractions.

The simple user-friendly nature of the technology poses a perfect alternative choice for blockchain-led crowdfunding projects.

Concerns have risen as to how the service will be monitored moving forward to make sure there is not a messy amount of useless tokens floating around the network.

Crowdfunding companies like Kickstarter and Indiegogo have a stringent application process to make sure funding is safe and trustworthy. In December Indiegogo announced a new ICO and Blockchain Investment service that could offer similar benefits to Waves.

Interestingly, a recent partnership between Waves and Deloitte formed to launch a regulatory body to set standards for initial coin offerings.

“In addition to that, one of our objectives is to develop the legal mechanisms for regulating ICO projects. Currently, no such mechanisms exist in the market. This will help the companies to safeguard themselves from project risks and challenges after they complete the initial offering of tokens.”

Primalbase is an example of an project that completed its ICO on the Waves platform – it raised over 3000BTC during its crowdsale.

Building upon the well-established business model of shared workspaces, the Primalbase project transforms traditional office rental into a new-generation community-based ecosystem where one can share, sell or rent out high-quality office spaces using Ethereum and Waves-based digital tokens.

Another popular ICO from 2017, MobileGo, also used the Waves platform to raise $53 million during its crowdsale.

MobileGo aims to bring the advantages of cryptocurrency to the gaming industry by using smart contracts to power peer-to-peer eSports tournaments. The project is creating a community of gamers and developers around the GStore – an open platform on which all games are purchased for the game credits cryptocurrency.

In order to facilitate the tokenization on the network, the Waves team are working to initiate gateways between fiat and cryptocurrencies. The idea is to enable users to fluidly move funds from banking and payment industries into cryptocurrency.

For example, a recent Euro gateway was added to the platform which enables people to store funds as a Euro-backed token and use them with all the added benefits of the blockchain.

It continues to be a clunky process moving between fiat and crypto with investors requiring trading platforms or credit card purchases which are still niche and alien to most of the world. For ICOs and other investments, most people will first buy Bitcoin before trading to ether and then purchasing tokens. All of which can become more expensive and time-consuming that it should be.

Waves aims to open direct routes between fiat, Bitcoin and others to break down these barriers. The platform is trying to mainstream cryptocurrencies with fluid on-off ramps for those with minimal coding and technical experience. Partnerships with payment services will allow for the standardization of this process.

Ironically, cryptocurrencies often need a central exchange to trade decentralized assets. However, when it comes to trading Waves tokens, one can use their decentralized exchange (Dex).

Whilst it is not the only one that has been developed, the Waves Dex provides an edge over competitors thanks to the Dollar, Euro and Yuan gateways. Adding to this is smart contracting abilities that provide automation to the blockchain. Applications are built away from the network and are then added on in a similar fashion to a plug-in.

Finally, Waves also has an interesting consensus method that audits the network. While using proof of stake consensus models are nothing new, a lease option opens up mining to everybody. 10,000 Waves is required to become a full node and start auditing the network.

These nodes then earn a small amount from transaction fees, almost like earning interest on the investment. Waves allows blockchain users to pool funds by leasing coins to nodes if they don’t have the 10,000 minimum Waves balance.

It has to be said that returns are small and will be for the foreseeable future, but the rapid network growth makes it another speculative investment in the cryptocurrency world.

Adding fiat gateways is an added bonus that could bring real fluidity to the industry. A redesigned client interface now makes it easier than ever for users to start with Waves.

Its design matches up to the best banking and trading apps enabling anyone to profit from the powerful system without the need for previous blockchain experience.

If the platform heavily links with banking and financial institutions its future will be a bright one. Expect Waves to continue disrupting the tokenization and crypto markets in 2018.