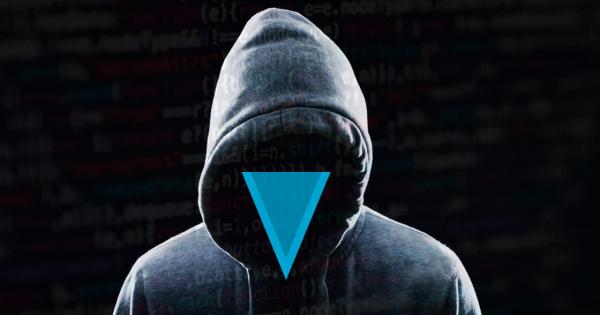 Privacy-focused cryptocurrency Verge is a divisive topic within the cryptocurrency community. While staunch Verge supporters are quick to decry “FUD” at any and all negative news regarding their favored coin, an increasing amount of evidence that the project may be a large-scale exit scam is manifesting — notably, the disappearance of over 18 million XVG from the Verge “fundraising” wallet.

The credibility of Verge has taken a hit recently due to extensive Wraith protocol release delays and allegations of paid pumping by John McAfee. While Verge proponents have vehemently defended the token over recent months — in spite of a bizarre fundraising request and unsubstantiated partnership announcements — the increasingly erratic actions of the Verge development team are becoming impossible to ignore.

The latest development in the ongoing Verge circus is the most concerning to date. Verge recently announced a fundraising project, asking supporters to “donate to support development,” hinting toward a partnership that “represents an enormous potential market with a global reach.”

The fundraising effort has, to date, yielded 76.2 million XVG, or a little over $6.4 million USD.

While Verge hasn’t provided any specific information on how this capital is to be used, the disappearance of over 18 million XVG from the fundraising wallet on the 13th of April has become a serious source of concern in the cryptocurrency community.

As evidenced by publicly available information, 18,600,021 XVG were moved from the fundraising wallet to a Binance exchange wallet on Friday — assumably for immediate liquidation.

The transfer of tokens was met with immediate derision from the cryptocurrency community at large. While the movement of tokens to an exchange wallet is, in itself, cause for immediate alarm, subsequent statements from Verge CEO Justin Sunerok Valo have thrown gasoline onto a FUD fire that threatens to burn the entire project to the ground.

The Verge dev team took to the Verge telegram group shortly after the transfer to inform supporters that the XVG was moved to pay Ledger — presumably for Ledger wallet integration. While this may sound reasonable, there are many elements of this explanation that don’t add up.

The official Verge Twitter account was also quick to address community concerns, stating that the tokens were being moved to “partnership wallets, where they belong”, requesting that the VergeFam “stop panicking.”

Before the FUD and panic and rumors even start…

This explanation in itself doesn’t make much sense — it’s unclear why “partner wallets” would consist of one single Binance wallet address — but replies from Ledger representatives shed light on the rapidly deteriorating situation.

Ledger CTO, Nicolas Bacca, in reply to community comments in a Reddit thread, stated that the Ledger team is not currently working on Verge integration:

Bacca’s statements are reinforced by Ledger VP of operations David Balland, who announced on Twitter that Ledger is “not working on any Verge integration.” Fred de Villamil, the Vice President of Engineering at Ledger, clarified the organization’s position on the supposed Verge partnership or integration on Twitter:

Except there is no partnership nor planned integration with us.

Verge’s justification for the transfer of XVG from the fundraising wallet to Binance, based on the above information, is clearly untenable. As if outright denial from the Ledger team of any XVG integration is not damning enough, however, further statements from the Verge development team are inconsisent.

In response to concrete evidence, the Verge dev team advised Telegram group members that they “started a conversation with Ledger” and “got pricing for integration,” planning on “picking the conversation back up next week once (they) had funds.”

Sounds reasonable? Not according to de Villamil, who has stated explicitly that Ledger does not charge for integration:

“Ledger does not charge for coin integration anymore. Either the integration is provided by the community, which we help for free,  or we follow our own integration roadmap. Have a nice day.”

Further inconsistencies include statements from Verge core marketing team member PhanTi, who announced via Twitter that Verge has not yet talked to Ledger:

We -obviously- didn't talk to Ledger so far, we just separate the funds for the single projects. We are pretty busy handling the stuff for tuesday, ledger is secondary this weekend.

At this stage, it’s clear that the XVG transferred to Binance are not intended to be delivered to the Ledger team — who don’t want them anyway. Verge proponents are struggling to defend the actions of the Verge dev team, who have presented inconsistent reasoning for the transaction.

There are many ways to determine the likelihood of a Verge scam. The same rules that can be applied to the assessment of an initial coin offering can be applied to Verge — the most important factor to consider when determining whether a blockchain project is fraudulent or not is the team behind it.

The history of the team behind Verge — specifically Verge founder and CEO Justin “Sunerok” Valo — is colorful indeed. Valo may currently operate as the leader of the Verge team, but his less recent history provides interesting insight into the credibility of the project as a whole.

The Verge Medium blog team post describes “Sunerok” as possessing “20+ years in network security” and “6+ years in blockchain.” Publicly available conviction and arrest information, however, shows that from 2003 to 2010, Verge founder Justin “Sunerok” Valo was arrested eight times on a variety of charges including criminal mischief, prowling, traffic violations, and failure to appear in court.

Other arrest information from Charlotte County shows that Valo has been arrested for trespassing, giving a false name, and the possession of schedule 1 narcotics.

While a history of criminal convictions doesn’t necessarily mean that Valo is unqualified to pilot the Verge project, it is worth factoring into a nuanced analysis of Verge’s credibility.

It should be noted, however, that many other blockchain industry innovators possess a criminal history — such as Bitcoin core developer Craig Wright, Bitcoin.com CEO Roger Ver, and industry veteran Charlie Shrem.

Is Verge a Scam?

The facts of the matter, when presented in simple terms, are incriminating indeed. Verge transferred fundraising capital earmarked for “partnership development” to an exchange wallet, then misled the community about why. In the world of cryptocurrency, if a project looks like a scam and acts like a scam, it’s probably a scam.

A single concerning factor — such as a delayed deadline, strange fundraising requests, or even paying shills to pump a token — isn’t enough to label a blockchain project as an exit scam. The criminal history of the project’s founder combined with the above factors alongside outright deception of the Verge community, however, is worrying indeed.

Until an exit scam occurs, it’s too early to conclusively state that Verge is a scam — but Occam’s razor dictates that it may be likely.

Verge is a decentralized currency designed for users who value privacy. Learn more

Justin Sunerok is the founder and Lead Developer of Verge Currency. Learn More