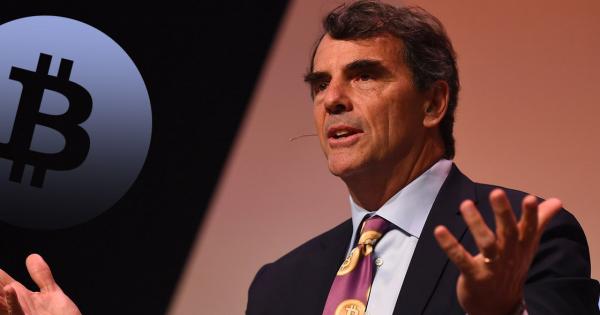 Institutions should be comfortable to hold bitcoin soon. I evaluated Coinbase, Ledger, Anchorage, Bitgo, Casa, and Gemini for custody solutions. There is amazing security available. My coins are so well secured, I… https://t.co/oBipoi1hhI

Draper claims his coins are so well secured that even he can’t get to them alone.

Institutions should be comfortable to hold bitcoin soon. I evaluated Coinbase, Ledger, Anchorage, Bitgo, Casa, and…

Draper, a strategic investor in American crypto exchange Coinbase and Robinhood, is well-known for acquiring nearly 30,000 BTC in July 2014 at the US Marshals Service auction of seized coins from the now-defunct black marketplace, Silk Road.

In November 2018, Fortune’s Jen Wieczner asked Draper in an interview whether he was still holding the bitcoins he purchased at the auction. Responding to Wieczner’s question at a time when the BTC price had dropped from its all-time high of nearly $20,000 to around $6,400, Draper said he was not only holding those bitcoins but he’d also purchased more.

Bitcoin is good for humanity

In a recent interview with CNBC, Draper argued that Bitcoin is good for humanity and that regulatory authorities should not unnecessarily interfere with the digital currency’s ongoing growth and development.

“[The discussions about cryptocurrencies are] bringing [Bitcoin] to light. It’s good to have people talk about it because the more they talk about it, the more they realize how important bitcoin is going to be for the planet, for all of us.”

“This is one of the best things that’s ever happened to us.”

The bullish Harvard and Stanford graduate predicted last year that the bitcoin price will surge to $250,000 by 2022. Elaborating on why he believes BTC’s value will continue to rise, Draper told Wieczner during a panel discussion:

“[Bitcoin will make up] about five percent market share [of the daily global transaction volume] to get to $250,000. That seems like a drop in a bucket and all we need to really do is make it so that Bitcoin can be used to buy Starbucks coffee, and all of a sudden the world just opens up and then they say ‘I’ve got this choice.’ … Do I want a currency that I can take from country to country … or do I want one that sticks me in one country or one geographic area and I can’t use it anywhere else?”

According to the prominent tech investor, the reduced costs of conducting cross-border transactions and the relative ease of making remittance payments with cryptocurrencies will help humanity by improving the global economy.

Unlike other industry participants who’ve criticized Facebook’s Libra project for being centralized or not being a true cryptocurrency, Draper believes the social media firm should be given a chance to develop and ship their own digital asset. He stated:

“They haven’t even been able to ship it yet, and the regulators are all over them. Let them ship the thing. Let’s see how it happens. Let’s let things roll, and then if there’s a problem, then, great, now it’s time for regulators to step in.”