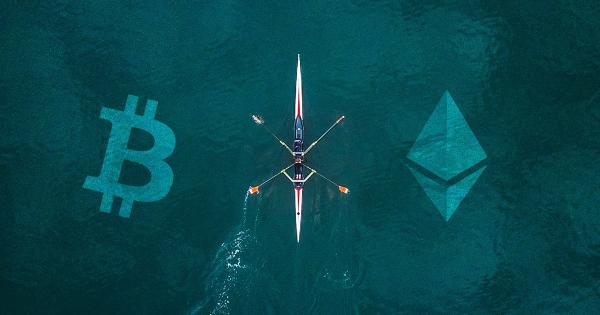 Ethereum has seen extreme growth over recent weeks. According to CryptoSlate data, the cryptocurrency is up by 68.5 percent in the past month, outpacing effectively all other multi-billion-dollar assets in existence.

With the recent move higher, ETH now has a market capitalization of $44 billion, making the cryptocurrency the size of a medium-to-large corporation.

Recent events in the blockchain industry, though, have made some think that Ethereum is on its way to a $1  trillion valuation.

One investor in the space, in fact, recently went as far as to say that there will be a “race” between Bitcoin and Ethereum to reach a market capitalization of $1 trillion.

Ethereum and Bitcoin could “race” to $1 trillion valuation

On Aug. 9, Placeholder Capital’s Chris Burniske rhetorically asked Crypto Twitter: “Ready to watch $BTC & $ETH race each other to a trillion in value?” In saying so, the prominent cryptocurrency investor is implying that the two blockchains will approach that milestone around the same time.

Ready to watch $BTC & $ETH race each other to a trillion in value? https://t.co/BAffYQMPSF

This isn’t the first time Burniske has mentioned this sentiment.

In June, the analyst, formerly of Bitcoin-friendly investor ARK Invest, noted that if Bitcoin crosses above $50,000, he thinks there is a likelihood “ETH [is] over $7,500.” At $7,500, Ethereum would be just shy of the $1 trillion market capitalization that he believes may eventually be reached.

Burniske attributed his sentiment to his thoughts on how a retail audience, similar to the audience that invested in Bitcoin in 2016-2017, will address and invest in Ethereum:

Other fund managers agree with Burniske’s sentiment that Ethereum’s market capitalization could hit $1 trillion in the near future.

As reported by CryptoSlate previously, Joseph Todaro, managing partner of Blocktown Capital, said that decentralized finance will do more to catalyze a bull run in Ethereum’s price than ICOs ever did:

In 2017 ICOs aided in moving ETH beyond $100 billion marketcap

In this next cycle, Defi will likely help push ETH to $1 trillion marketcap

This has been echoed to a T by Ryan Sean Adams of Mythos Capital, who published an article by DeFi analyst Lucas Campbell on how Ethereum could hit a $1 trillion market capitalization due to DeFi trends.