Fidelity had urged the Department of Labor to issue guidance and not opinion on Bitcoin investments for retirement funds. 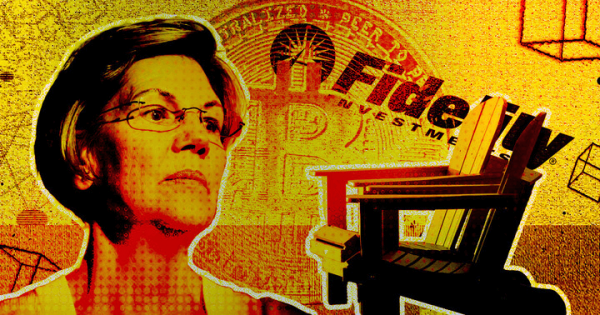 Senator Elizabeth Warren and Tina Smith have written a letter to Fidelity over its decision to allow Bitcoin investments in its 401(k) plans.

The letter asked the investment firm why it failed to heed the Department of Labor (DOL) warning regarding crypto investments as part of pension retirement plans.

The letter also raised concerns about the conflict of interest, given that Fidelity is a Bitcoin miner and manages crypto investments for its wealthy clients. A part of the letter asked what the company plans to do regarding the risks of crypto assets.

Senator Warren is one of the most vocal anti-crypto voices in the US Senate. The Massachusetts senator has criticized the industry and recently sponsored a bill to block crypto companies from dealing with sanctioned entities.

While Senator Warren and Senator Smith might have some skepticism about crypto investments in pension funds, Senator Tommy Tuberville is looking to counter any attempt by the DOL to ban Bitcoin investments as part of retirement plans.

🚨 NEW BILL ALERT: I just introduced the #FinancialFreedomAct, allowing retirement savers to invest their 401(k) funds as they see fit.

The government should not be in the business of telling retirement savers how they can invest their money.https://t.co/6LGtpxquOW

The Republican senator recently introduced the Financial Freedom Act bill, which would grant citizens of the country the right to invest their money in any investment vehicle.

The Federal Government has no business interfering with the ability of American workers to invest their 401(k) plan savings as they see fit.

He continued that the DOL has no power to

Limit the range or type of investments retirement savers can select.

L*z W*rr*n really out here trying her best to become the most hated person in America https://t.co/M23uoIcabi

Many seem to share his views because crypto assets as part of retirement plans are becoming more common. Fairfax County in Virginia recently announced its plans to invest pension funds into yield farming.

Department of Labor cautions against crypto investments for pensions

With several investment firms marketing crypto investment as a viable option for retirement plans, the DOL has been forced to caution these firms about this investment.

In March, it published a Compliance Assistance Release, which discussed the risks of crypto investments to retirement plans and reminded fiduciaries of their duties. DOL specifically questioned whether it’s a smart decision for fiduciaries to provide crypto assets exposure to 401(k) plan participants, given the volatile nature of this investment class.

Fidelity, however, does not think that its Bitcoin 401(k) investment plan goes against the compliance document as it has urged the Department to guide the industry.