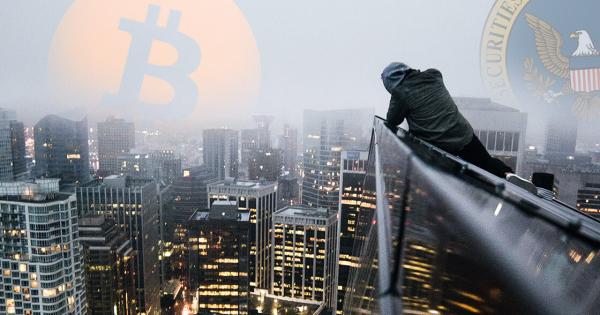 Photo by Rye Jessen on Unsplash

With Wall Street seemingly moving from the sidelines to their pre-match pep talk, the weight of institutional participation in cryptocurrency would no longer rest on the lone shoulders of a Bitcoin ETF approval. Those still looking to the SolidX-VanEck ETF application may be in luck, however, with the SEC having revealed fresh details in a memorandum.

The document lifts the lid on the commission’s meeting, Oct. 9, with VanEck, SolidX, and representatives from the Chicago Board Options Exchange (Cboe) — who appear to have far from thrown in the towel on their years-long quest for approval on what many consider the weightiest Bitcoin ETF proposal in a long queue of contenders.

Since first filing for listing on the New York Stock Exchange in 2016, VanEck and SolidX have faced a series of rejections by the SEC, defending at length the validity of their prospective Bitcoin ETF after making a host of applications — the most recent of which currently awaits judgment as the commission purportedly seeks additional input.

As outlined in the new memorandum, the duo claimed not only has their product changed since their previous ETF application — rejected in March 2017 due to its apparent failure to “protect investors and the public interest” — but that the entire market structure and “overall circumstances” surrounding their application had now shifted in their favor.

Addressing one of the SEC’s chief objections to the earlier proposal, VanEck and SolidX claimed their current physically-backed Bitcoin ETF application not only was compliant but would, in fact, offer investors a “straightforward solution” to some of the dangers currently faced by investors. The memorandum stated:

“Approval of the Trust will ameliorate several crucial issues and protect the public interest: Bitcoin is a bearer asset. Holders face operational risk: theft, loss, destruction of cryptographic keys. The solution is to have insurance.”

Banging the gavel on the earlier VanEck-SolidX proposal, the SEC took aim at the Bitcoin market itself when it stated exchange-traded products were only approved on “well-established, significant, regulated markets for futures.”

This particular assertion seems to have become the subject of fierce debate; and the catalyst for SEC Commissioner Hester Pierce to publish a public dissent claiming the commission had “no jurisdiction” to assess underlying assets.

VanEck and SolidX also took the opportunity to slip in a quick jab at the SEC, arguing they for too long had been dangling the carrot:

“As issuers, we are concerned the SEC staff have created a moving target in their use of the word ‘significant.’ The Staff have never provided guidance as to what ‘significant’ means, enabling them to move the goal post indefinitely.”

However vexing the SEC’s rulebook may have been to date, the applicants claimed today’s Bitcoin market met all of the commission’s criteria as a fully-regulated, and “significant” derivatives market, and that their application ought to be given the green light.

SEC Commissioner: ‘No Reason’ Not to Allow Bitcoin ETF