European banking powerhouse Santander is partnering with Ripple to create a new platform that will allow users to facilitate cross-border transactions seamlessly. 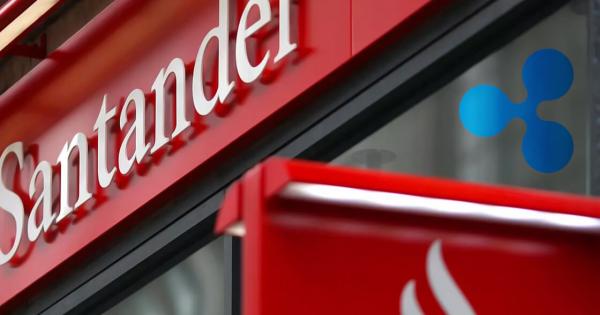 European banking powerhouse Santander is partnering with Ripple to create a new platform that will allow users to facilitate cross-border transactions seamlessly.

While speaking at the International Fintech conference in London, Nathan Bostock, UK CEO of Santander, mentioned that his company had been testing Ripple’s popular xCurrent and RippleNet platforms for streamlining international payments.

“This spring, if not one beats us to it, we will be the first large retail bank to carry out cross-border payments at scale with blockchain technology.”

Regarding the app’s specifications, the new platform will allow for all payments to be settled within 24 hours.

Not only that, users will also be able to see the processing fee involved with each transaction upfront — thereby eliminating the need for financial intermediaries who are known to charge hefty transfer sums on every individual payment.

While no exact timeline has been given for this move, Santander has been linked with Ripple for some time now. As per reports, the financial institution had first invested in the distributed ledger provider back in 2015 and then once again a year later.

Additionally, at a conference earlier this year, Santander CEO, Ana Botin had spoken about the launch of the app, saying that it would primarily focus on the company’s European and South American customer base —  naming countries like Spain, Brazil, Poland and the United Kingdom in particular.

In the past few months, Ripple has garnered a lot of attention from financial service providers across Europe and Asia.

This has primarily been the case because there has been a growing focus on implementing digital assets and distributed ledger technologies for daily transactions worldwide.

To date, companies like Moneygram, BBVA, Cuallix, Western Union have all tested out Ripple’s technological offerings in an attempt to evolve their existing payment systems.

While these tests may have been successful to varying degrees, the fact that blockchain services are being pursued by large financial players is in itself a step in the right direction.

What can we expect in the future

With the blockchain revolution now in full swing, established banking institutions have begun to realize the futility of resisting advancements being made within the crypto domain.

Since distributed ledger systems promise to make cross-border payments smoother and much more streamlined, it will only be a matter of time till we start to see more of such announcements being made on a regular basis.