Ethereum's price recovery led it to recover its dominance over stablecoins, with its market cap now standing at just over $243 billion. 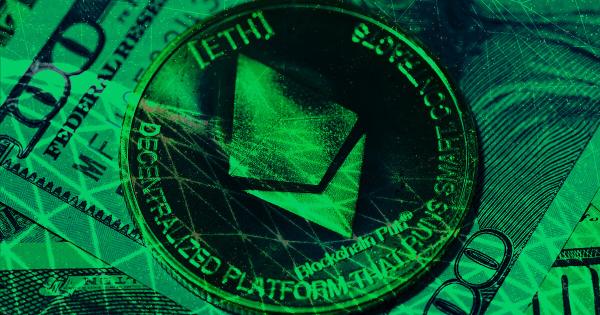 One of the easiest way for investors to deleverage their positions is to turn to stablecoins. Centralized stablecoins, unlike their algorithmic counterparts, are resistant to volatility and retain their peg even in the most violent market conditions.

Over the past two years, the market has seen stablecoins grow significantly and become one of the most important parts of the crypto ecosystem. At its peak, the market capitalization of stablecoins reached $160 billion.

The importance of stablecoins was further cemented in 2022, when the industry saw an unprecedented amount of value flow out of volatile crypto assets. All of the value leaving volatile assets, sparked by the Terra (LUNA) implosion and the subsequent liquidity crisis, made its way into stablecoins.

The amount of value entering the stablecoin market caused the four largest stablecoins to surpass Ethereum (ETH) in terms of market capitalization.

However, the increase in speculation surrounding Ethereum’s upcoming Merge in September has pushed pushed ETH’s price upwards, defying the dominant bearish market trend. Ethereum’s price recovery led it to recover its dominance over stablecoins, with its market capitalization now standing at just over $243 billion. 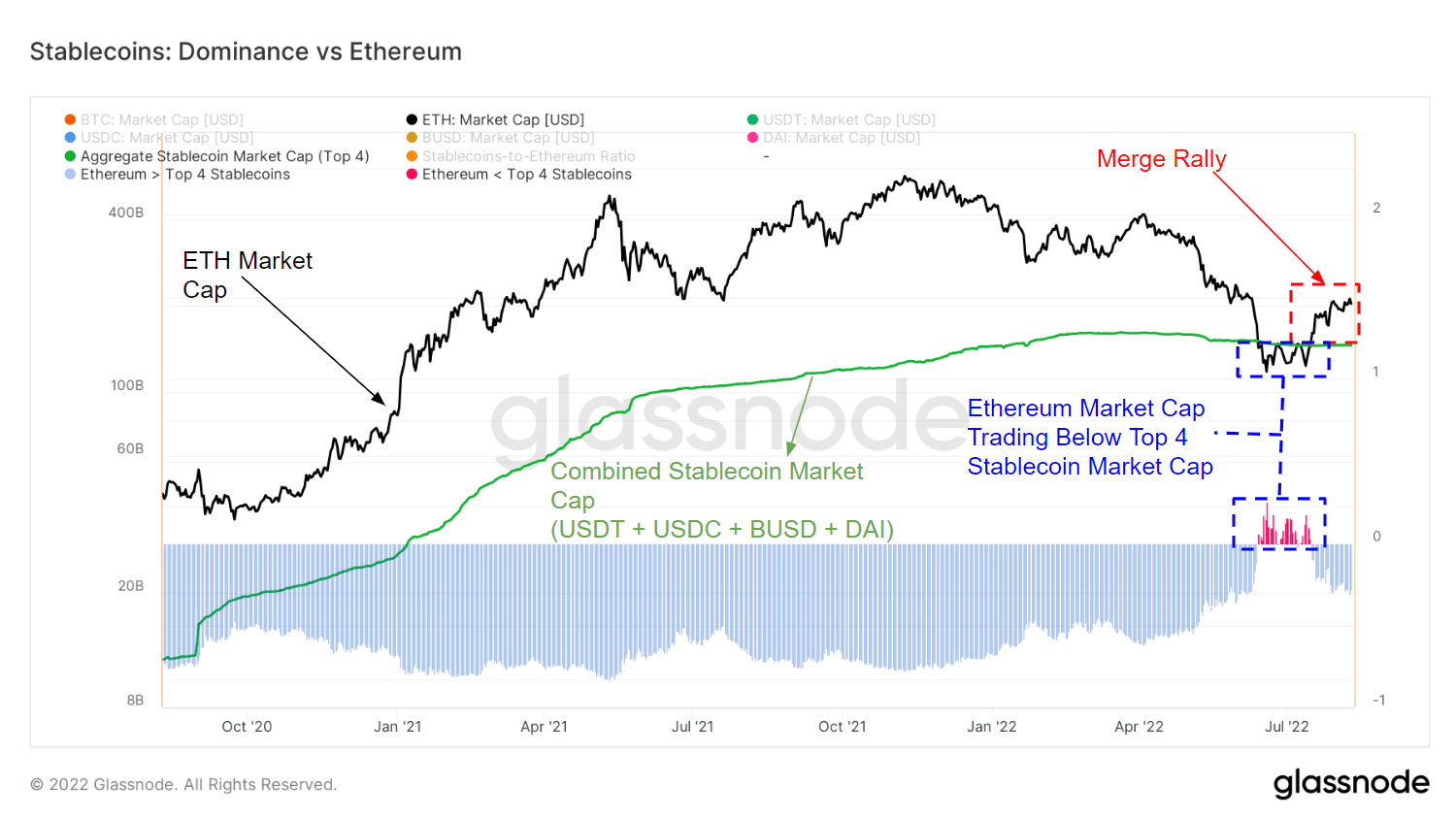 One of the biggest factors that led to Ethereum’s drop in price and market cap was the drastic decrease in the total value locked (TVL) in its DeFi protocols. The Terra (LUNA) blowback caused massive deleveraging in DeFi, with investors pulling their tokens out of lending protocols en masse.

The 2022 deleveraging came as a complete opposite to the DeFi boom the market saw in 2020 and 2021 with the introduction of yield farming. With new lending protocols emerging almost daily, the total value locked (TVL) on Ethereum peaked in 2021 at $253 billion. This year’s deleveraging caused the TVL to drop over 70%, down to just $72 billion.

According to data from Glassnode, Ethereum’s TVL could have bottomed in June. The TVL remained tied to $72 billion for a short period of time, posting a slight recovery in mid-June and continuing to climb up as we entered into August. 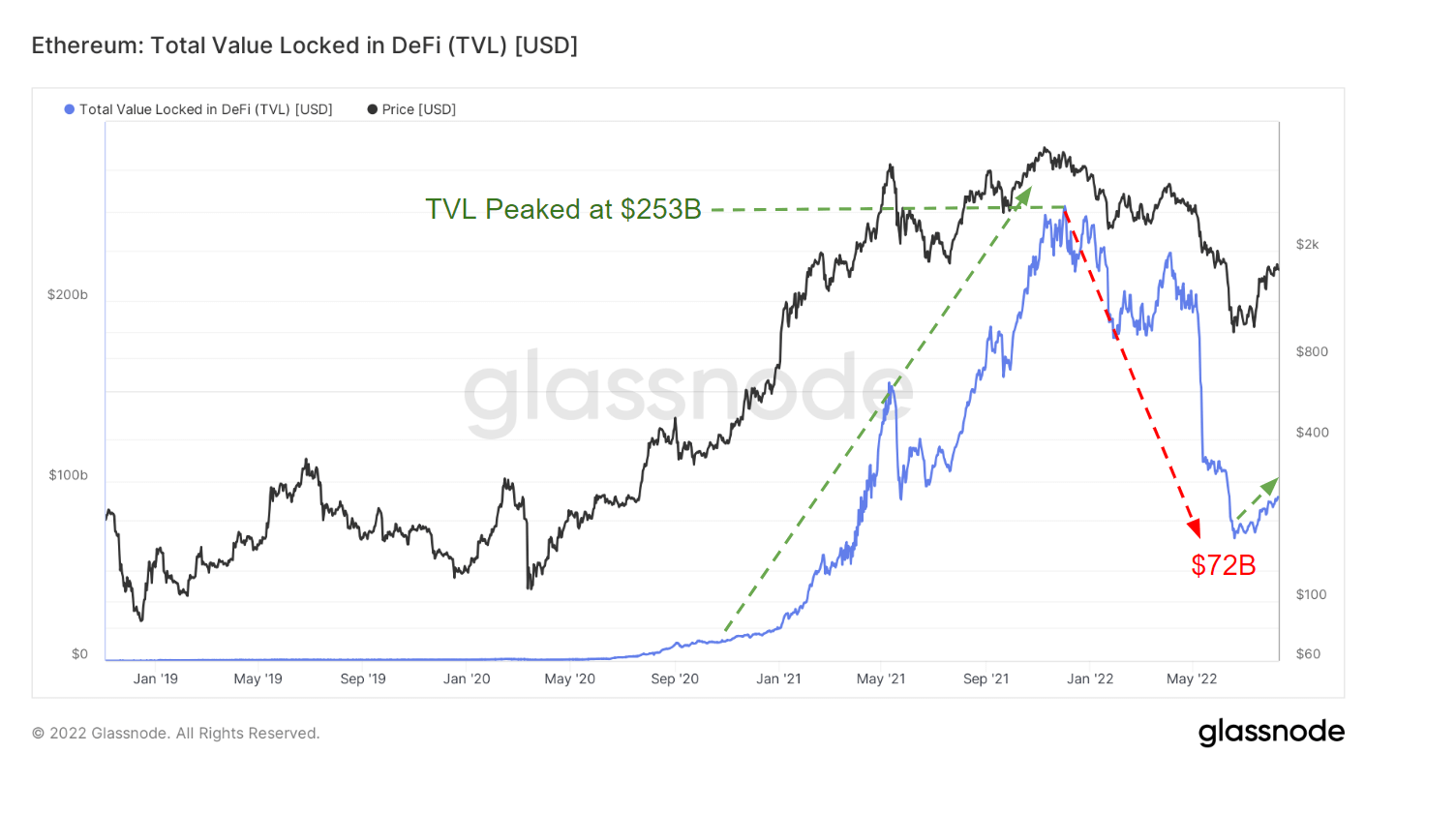