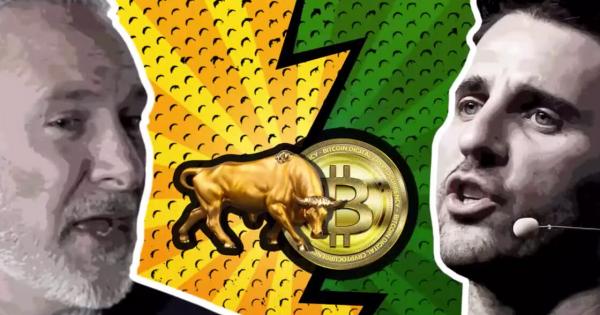 The event had been widely promoted on Twitter by CNBC’s stalwart cryptocurrency bull, Ran Neuner—who as the show’s host and moderator brimmed visibly with excitement as the two entrepreneurs engaged one another on the moot.

Schiff, a gold proponent, and Pompliano, one of the cryptosphere’s celebrated Bitcoin bulls, have in recent years become two of Twitter’s most vocal mouthpieces for their assets of choice and have repeatedly traded blows over their merits on the social media platform.

Whatever tensions had been drummed up prior, however, the debate began with marked restraint and a number of concessions made on both sides.

Presumably wanting to shake off the faintest whiff of Bitcoin maximalism, Pomp installed his expectedly moderate stance noting he saw “eye-to-eye” with Schiff on the current importance of “good stores of value” given the number of factors indicating an impending global recession.

The Morgan Creek executive noted gold was included in such a category, seemingly attempting to diffuse tensions and turn debate into discussion:

“I actually think gold has a place in peoples’ portfolio, but I do think it’s a little short-sighted to say gold, not Bitcoin.”

Schiff reciprocated the gesture of goodwill offering “a lot of sympathy” to Bitcoin proponents—whom he understood looked to overcome the shortcomings of the traditional monetary system. Sentiments of solidarity for Bitcoin and its community seemed to be all but exhausted after this admission.

Gold, according to Schiff, originally derived its status as store of value because of its real-world utility outside of storage and transaction—a key distinction from the original cryptocurrency that gave it supposedly irreplicable value and made people “need gold”. He stated:

This quickly became a recurring mantra in Schiff’s argument, with the financier on more than one occasion reiterating gold’s usage cases in consumer electronics and jewelry—the latter being an example that at one point drew Neu-Ner into the firing line when he chortled. Schiff did not appear to be in the mood for light-hearted humor, scolding the moderator:

The sole value of Bitcoin, on the other hand, was in the words of Schiff “completely a function of the confidence that people have that they’ll be able to give it to somebody else in the future for a higher price.”

And to Schiff, even this one utility had serious limitations, adding he knew “many people” that had “pie-in-the-sky delusions about how high the price” of Bitcoin would go.

Not Pomp’s first time in the ring

Pomp—arguably one of the more battle-hardened spokespersons for Bitcoin—seemed to have on hand a boundless supply of statistics and carefully sculpted analogies to counter Schiff’s blows.

He pointed to indicators other than price the cryptocurrency was being realized as a store of value, while surmising gold was valued most widely for speculative properties, not for physical products as Schiff claimed.

Citing the transaction volumes handled by Bitcoin in 2018, which as reported previously by CryptoSlate exceeded that of PayPal in USD terms, Pomp suggested BTC’s recent price appreciation stemmed from the continued growth of the network and its internet-enabled virality—a “network effects” quality mirrored in the successes of Google, Uber, and other technological incumbents. He explained:

To get you to switch is really really hard to do, because once the network starts to grow, there’s lock-in. And so when you get that with money, you’re getting millions of people.

In Pomp’s words, Bitcoin is a “layer one technology” akin to gold, with the added benefits of it being more portable, non-seizable, cryptographically secure, divisible, and fixed in supply.

Bitcoin today is simply serving as a layer one technology, it’s the equivalent of gold in that it doesn’t need to be super scalable for transactions like coffee etc.—there will be these other layers that eventually get built on top of it.

Schiff remains unmoved, paints all cryptos with the same brush

Schiff at times had to be directed back to the topic at hand by Neu-Ner—the gold bull more than once taking aim at the wider cryptocurrency community and the “2000+ cryptos” that he surmised had “no value”.

At one point, the Connecticut native issued a scathing retort to Pomp’s earlier nod to gold as an investment choice, suggesting “you might as well put lottery tickets in your portfolio [instead of cryptocurrency]”.

Despite the admission Bitcoin’s price could once more break its all-time-high, Schiff’s apparently unshakable stance seemed to impassion the moderator towards the last minutes of the debate—Neu-Ner stepping in with a plea to let Pomp make his ultimate case.

While no winner was announced by Neu-Ner, Pomp seemed to think he’d done enough to claim bragging rights after the event:

BANG BANG — Sat down and schooled @PeterSchiff on the future for an hour ?https://t.co/crvkYe14Kv

Schiff, however, appeared equally satisfied he had dominated his opponent:

I think you are a bit confused as to which one of us was the teacher, and which one was the student. Unfortunately it does not look like you learned anything in school, so you still need to do a lot of homework!

75% of respondents to a Twitter poll by Neu-Ner would tend to side with Pomp at time of press.

Who won the debate?
(only vote if you watched it)https://t.co/8dplts6QWx

The full debate can be viewed here.