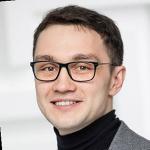 Gregory Klumov is a specialist in alternative asset management. Starting in IT, he founded a high-speed internet service provider called BNET at 15 before moving on to financial analyst and management roles. Klumov became active in the Bitcoin and digital as-sets space during its emergence, eventually putting together a book on their regulation targeted at state-level decision-makers (“Digital Asset Regulation: A Cross-Country Analysis”).

He worked a vital role as advisor to the Maltese government, forming the regulatory framework that facilitated blockchain companies like Binance and OKEx moving to the island. Having lectured at schools including the Frankfurt School of Finance and Management, IMD in Lausanne, and the Finance University under the Government of the Russian Federation, he is proficient in simplifying complex topics related to technology and finance.

Klumov’s current focus is on his company STASIS, a fiat-tokenization platform with its flagship product being a fully audited tokenized Euro, a first on both fronts.