NFTs on Ethereum are booming, but that comes at the expense of high gas prices. 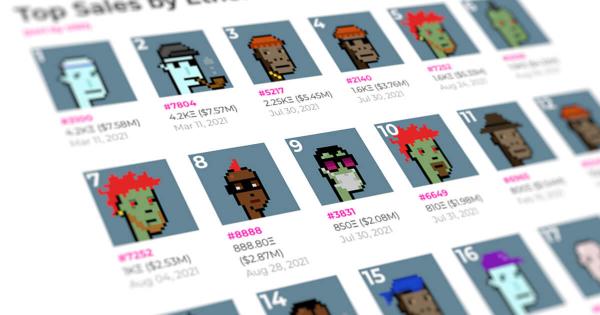 Just when you thought NFTs had died a death, a revival in Bitcoin has coincided with non-fungibles also coming back to life. This is all the more evident considering the buoyancy of major NFT collections of late, especially the CryptoPunks range.

As reported by Tech Crunch, data from NFT industry aggregator CryptoSlam shows CryptoPunks’ lifetime sales have hit a staggering $1.1 billion. With $637 million of that coming in the last four weeks.

This puts the average sale price of a Punk at 35.13 ETH ($111,853). Not bad, considering creators Larvalabs were giving these out for free back in June 2017 when they launched.

All of this begs the question of whether CryptoPunks and NFTs, in general, are caught in a bubble. But with no sign of a slowdown either in digital art or the wider crypto market, how might this affect the rest of the industry?

What are CryptoPunks NFTs?

CryptoPunks is a collection of 10,000 collectible characters stored on the Ethereum chain. Each is a 24×24 8-bit styled pixel art image that is algorithmically generated to be unique.

Most are described as “punky-looking” people, but rarer types also exist, including apes, zombies, and aliens.

“The CryptoPunks are 10,000 uniquely generated characters. No two are exactly alike, and each one of them can be officially owned by a single person on the Ethereum blockchain.”

As one of the first examples of NFTs, many consider them somewhat pioneering in terms of paving the way for blockchain digital art.

The resurgence of cryptocurrency prices, coupled with a desire by the crypto wealthy to diversify their holdings without turning to fiat, has propelled, not just CryptoPunks skywards, but NFTs, in general, are also experiencing a boom in valuations.

According to @fintechfrank, the price of NFTs continues to surge, with a current average selling price of $63,700.

Ethereum gas fees are becoming a problem once more

While many platforms offer NFTs, including Theta, Tezos, and Axie Infinity, Ethereum still remains the most dominant platform for non-fungible tokens.

Since finding a local bottom of 40.4 gwei on August 21, gas prices on the Ethereum network have soared peaking at a 14-week high of 121 gwei last Friday.

While that’s still a way away from the peaks of 500 gwei seen during last year’s “summer of DeFi,” the overriding thought is that we could be heading back to those prices.

With Cardano nearing smart contract rollout and promising cheaper fees to transact, might NFTs be the straw that broke Ethereum’s back?

A 3D glass-wearing CryptoPunk just got sold for $1 million