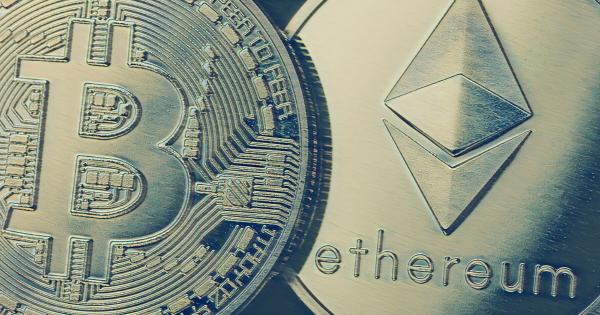 Bitcoin, Ethereum, and other large-cap cryptocurrencies saw a mixed weekend as price action remained choppy after Friday. However, some altcoins put on big numbers for holders.

Chop for Bitcoin and Ethereum

Bitcoin saw resistance at the $59,800 mark over the weekend and failed to break through the price level. It then fell to under $55,000 on Sunday before slightly recovering in the evening hours yesterday.

As the below image shows, Bitcoin sees resistance at the $57,000 price level at press time. It trades below its 21-period exponential moving average—a tool used by traders to determine market trend—but is neither “overbought” on “underbought” on the RSI.

Bitcoin saw favorable growth on the fundamental side. Deutsche Bank, a German banking giant, released research last week that said the asset had the ability to become a reputed global asset class. The bank, however, added that illiquidity and price volatility remained a concern.

#Bitcoin’s market cap of $1 tn makes it too important to ignore. But will it evolve into an asset class, or will its illiquidity remain an obstacle? Find out more in the latest instalment of “The Future of Payments” from @MarionLaboure and #dbresearch: https://t.co/dx71OpCSKJ pic.twitter.com/YYoOcroPa0

Ethereum, the world’s most used blockchain, saw a similar story as Bitcoin on the technical side. It failed to break the $1,860 level (which is proving to be resistance) and trades below its EMA—signaling more downside action in the short term.

The upcoming launch of the EIP-1559 proposal remains an overall positive and bullish signal for the asset’s growth ahead. Some corporations have even started to hoard the asset already, with Meitu, a Hong Kong-listed photo editing app, leading in this regard.

A rather-forgotten altcoin from 2017 surged over the weekend. VeChain, a Chinese wonder-project that focuses on using its blockchain to enhance supply chain systems and their management, grew 6% in the past day and over 44% in the past week.

As per data from markets tool CoinGecko, VeChain (as VET) has now set a new all-time high of $0.09. VET runs on the VeChain mainnet and was formerly known as ‘VEN’ on the Ethereum blockchain.

It is now valued at over $6.3 billion and has a current circulating supply of 64 billion. Meanwhile, the surge came on the back of continued adoption and integration of the VeChain blockchain on real-world products.

Cosmetics brand YI ZHI JI looks to the future by incorporating blockchain in their products, allowing customers to configure a personalised page stored on #VeChainThor!

NFTs are also being considered by the brand to boost their application.https://t.co/RijGWdHlaV