2020 has been a year of Bitcoin adoption. 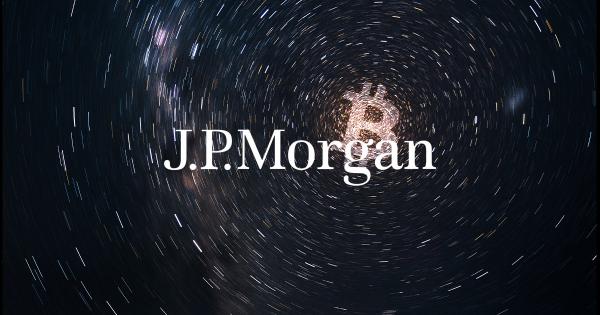 Photo by Marek Piwnicki on Unsplash

2020 has been a year of Bitcoin adoption. On the retail side, PayPal has launched crypto-asset trading while Bitcoin itself has seen widespread coverage by the world’s media. On the institutional side, Wall Street service providers have begun to service corporations and funds with custody and execution solutions.

But according to JPMorgan, Bitcoin can see much more growth moving forward, even if the world’s leading funds put a mere one percent of their assets into BTC.

JPMorgan explains what widespread Wall Street adoption would do to Bitcoin

As CryptoSlate analyst Joseph Young recently pointed out, JPMorgan strategists recently stated that there could be a $600 billion influx of demand for Bitcoin if the world’s pension funds and insurance companies merely allocate one percent of their assets to BTC:

“If pension funds and insurance companies in the U.S., euro area, U.K. and Japan allocate 1% of assets to Bitcoin, that would result in additional Bitcoin demand of $600 billion, the strategists said.”

This is a stunning bitcoin stat coming from JPMorgan strategists:

"If pension funds and insurance companies in the U.S., euro area, U.K. and Japan allocate 1% of assets to Bitcoin, that would result in additional Bitcoin demand of $600 billion, the strategists said."

What makes this even more interesting is the fiat amplifier or multiplier effect. The effect means that for every dollar invested in BTC, its market capitalization increases by more than that dollar.

This is largely a byproduct of the amount of Bitcoin currently off the market due to “HODLers.” Though, this phenomenon does exist in other markets as well.

Certain banks have estimated that the fiat amplifier in the crypto space is anywhere from five times to even one hundred times.

Assuming a low estimate of ten times, the aforementioned allocation as mentioned by the JPMorgan analysts could result in an increase in the market capitalization of Bitcoin by $6 trillion.

That would represent a fiat amplifier of 117.5 – thanks @cburniske for the correction.@cburniske's estimate of the fiat amplifier for 2017 was "anywhere from 2–25x depending on the assumptions used". See for more details: https://t.co/axcDtVB5qBhttps://t.co/1cAYhIHcxx

Everyone should own some

This potential allocation by worldwide asset managers is becoming increasingly likely as Wall Street investors and banks begin to promote Bitcoin as a gold alternative and a must-have in any portfolio.

Investors both within and outside of the crypto space are increasingly realizing that buying Bitcoin for any portfolio, both retail and institutional, only makes sense. As reported by CryptoSlate previously, Mechanism Capital founder Andrew Kang said that it is logical to own BTC for the following reasons:

We’re seeing this already with the entrance of MassMutual, a global life insurance company that purchased $100 million of spot Bitcoin earlier this month.

Fidelity, too, has highlighted the importance of owning BTC in a standard portfolio.

“Bitcoin’s fundamentals are relatively shielded from the economic impact of the COVID-19 pandemic… Bitcoin is also unique in that it continues to be influenced by retail investor sentiment and can capitalize on the shift in the way retail investors interact with traditional markets and consume financial information as well as the transfer of wealth to the millennial generation over the next 10 years.”