The FTX native token FTT recovered over 44% after the announcement FTX.COM would be acquired by Binance. The token then retraced by 23% to $15.90 at press time. 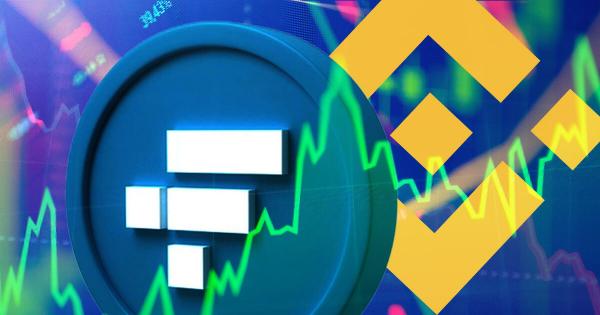 
Following the news that Binance will acquire the FTX exchange, the troubled FTT token popped 44% following a decline of 43% since Nov. 5. The native token of FTX fell over the weekend amid controversy around a potential insolvency issue at the exchange. News that Binance planned to sell over $500 million in FTT sent the token into a nose dive early this week.

The token is currently trading around $15.90 after falling as low as $14.50 earlier on Nov. 8. A support at $22 had been holding after Alameda Research CEO Caroline Ellison tweeted that the company was willing to purchase Binance’s FTT tokens for $22.

The entire crypto market appeared to recover after the announcement but a reversal has now caused FTT to fall by 23% from its daily high.

Sam Bankman-Fried said as recently as Nov. 7 that “FTX is fine. Assets are fine” while confirming that the exchange was “processing all withdrawals.” Further, SBF remarked that “a competitor is trying to go after us with false rumors” just hours after Binance announced the proposed liquidation of its FTT holdings.

Less than 24 hours later, SBF shared a post thanking CZ, the CEO of Binance, stating, “CZ has done, and will continue to do, an incredible job of building out the global crypto ecosystem.”

4) A *huge* thank you to CZ, Binance, and all of our supporters. This is a user-centric development that benefits the entire industry. CZ has done, and will continue to do, an incredible job of building out the global crypto ecosystem, and creating a freer economic world.

SBF said that the idea of “conflict” between Binance and FTX in the media was nothing more than a rumor. The statement begs the question as to the identity of the “competitor” that was “going after” FTX, if not Binance.

“Binance has shown time and again that they are committed to a more decentralized global economy while working to improve industry relations with regulators. We are in the best of hands.”

The FTX CEO also confirmed that there was a “backlog” of withdrawals to be processed which requires “Binance to come in” to support liquidity. Earlier on Nov. 8, CryptoSlate reported that FTX was showing a negative Bitcoin balance. The lack of BTC on the exchange will likely impact the “liquidity crunches.”

CZ commented that he expects the FTT token “to be highly volatile in the coming days as things develop” as Binance assesses the situation at FTX. Further, CZ remarked that “Binance has the discretion to pull out from the deal at any time,” indicating that the acquisition is not a done deal.

There is a lot to cover and will take some time. This is a highly dynamic situation, and we are assessing the situation in real time. Binance has the discretion to pull out from the deal at any time. We expect FTT to be highly volatile in the coming days as things develop.

“People have a legitimate reason to worry about the security of their digital assets if one of the world’s largest centralized exchanges ends up in financial difficulties. It’s time for an honest, industry-wide reckoning on the importance of crypto custody.

Following the collapse of Celsius, Voyager, and several other exchanges during 2022, Gauthier’s comments have never rung more true for many crypto investors. Crypto exchanges play an essential part in the flow of tokens in the blockchain industry. However, the core tenet of crypto is the ability to own your financial assets independent of third parties such as banks and governments.

There is a need for crypto exchanges at present to act as fiat onramps, to perform high-frequency trades, gassless spot trades, customer support, derivative trading, and much more. However, hodling crypto on an exchange causes investors to accept a degree of third-party risk. Storing crypto in a hardware wallet gives the power back to the wallet’s private key holder.

As CZ mentioned, the Binance deal with FTX is far from concrete at this stage, and it is unknown what impact a further decline in FTT’s price will have on the acquisition.