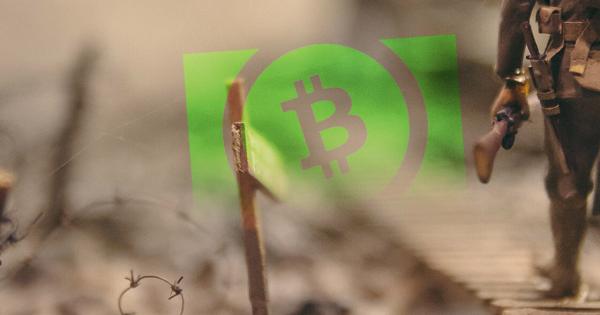 Recently, there has been a storm brewing in Bitcoin Cash (BCH). Two upgrades to the underlying software of Bitcoin Cash threaten to split the coin in two, and both factions are determined to fight all-or-nothing to determine the fate of Bitcoin Cash’s next upgrade.

Bitcoin Cash was conceived of in July 2017 as part of a Bitcoin Improvement Proposal (BIP 91). At the time, the Bitcoin community was opposed to upgrades in Bitcoin’s block size and a feature called SegWit. These changes would reduce transaction fees and increase Bitcoin’s throughput.

Roger Ver claimed that the refusal to upgrade benefitted investors over those who wanted to use the crypto as cash, as per inventor Satoshi Nakamoto’s vision.

Much like the war going on now, the communities declared a split and miners staked their sides. The two branches of Bitcoin have since separated, the longer one retaining the Bitcoin namesake and the other becoming Bitcoin Cash.

A Fight for Supremacy over BCH

Now another dispute has arisen, and it threatens to divide the Bitcoin Cash community. Every six months the Bitcoin Cash protocol hard forks to encourage the development of new features and upgrades.

Recently, factions have formed to lobby for which changes should be made, with the crux of the disputes revolving around how aggressively Bitcoin Cash should be upgraded and which faction should have defacto decision-making power over the currency.

On the spectrum, these factions are arguing whether a) the protocol should change quickly to keep up with other blockchains, or b) should change gradually to ensure that the Bitcoin Cash remains stable and secure.

Major factions have formed around different versions of the Bitcoin Cash software. Below is a non-exclusive list of the factions competing to upgrade the protocol:

To further complicate the mix, two of the biggest miners in Bitcoin Cash have staked sides: Bitmain and CoinGeek. Both miners have sufficient hash power to seriously disrupt the Bitcoin Cash network.

By attacking each other’s forks, these miners can cause long transaction delays, prevent transactions from getting submitted to the blockchain properly, and even invalidate transactions entirely.

Overview of the Main Factions

Where They Stand on the Issues

I. Limit Transaction Sizes and Retain Current Block Size for Greater Security:
Transaction size represents the number of bytes contained in any one transaction conducted on a blockchain. A limit of transaction sizes could prevent a very expensive attack on a certain type of Bitcoin Cash wallet (SPV wallets), although opponents say that this is unlikely because of the cost, so an upgrade is not necessary.

Retention of current block size at 32MB is a stance to help combat centralization. If block sizes increase, then only huge data centers can mine Bitcoin Cash. This means greater centralization and provides more potential ways to fork Bitcoin Cash by means of something called “poison blocks.”

II. Introduce Opcode OP_CHECKDATSIGVERYIFY (abbr. DVS on social media):
Opcodes are a special kind of computer logic that programmers use to improve and build software. This particular opcode would allow programmers to validate messages from outside the BCH blockchain, enabling oracles and cross-chain atomic contracts. Some oppose this feature because it could enable gambling to occur on BCH, which is prohibited in some jurisdictions.

III. Canonical Transaction Ordering:
A feature that places special rules on how transactions are ordered on the Bitcoin Cash blockchain. This feature is more preparation than anything else, allowing for future upgrades to the Bitcoin Cash protocol. In an announcement from ABC, they say it would allow for “massive scaling and improvements in the future.”

Bitcoin S.V.’s Stance on the Issues

I. Allow Miners to Mine Bigger Blocks:
S.V. would allow miners to mine blocks up to 128MB in size, up from the past limit of 32MB. This change would allow miners to elect to mine and accept vastly larger blocks, potentially increasing the maximum number of transactions that could be conducted on the Bitcoin Cash blockchain. This might be irrelevant though, considering that within the last three months block size has only ranged from 50KB to 3MB, far below the current cap. The largest block ever mined on BCH has been 8MB.

II. Reactivate Additional Opcodes:
Proponents of S.V. want to include the following opcodes:

These opcodes would allow developers to do and build more on Bitcoin Cash. Some developers oppose the proposed change because the “proposal came too late, it missed the generally-agreed-upon spec and code deadlines,” suggesting that instead of splitting the community that it should be proposed in the next soft vote. A technical explanation of these opcodes is available here.

III. Remove Script Instruction Cap:
A script is a program that is interpreted by the Bitcoin Cash software. The script instruction cap is how many instructions, or operations, these scripts can perform in one go. A removal of this cap would allow more complex scripts to run on BCH. But, it would also give hackers more ways to potentially disrupt BCH. Moreover, opponents say that there is no current use case where programmers would need to exceed this cap.

Bitcoin Unlimited’s Stance on the Issues

II. Lower the Voting Threshold for Soft Forks:
The Unlimited faction wants to implement features (BIP 135) that lowers the threshold for soft forking Bitcoin Cash. Currently, the percentage is set at 95 percent. As stated in the proposal, the changes would allow for a “spectrum of contentiousness to be represented” and prevent “small minorities from vetoing proposed changes” which can lead to stagnation in Bitcoin Cash upgrades and features.

III. Improve How Voting is Conducted for Miners:
Currently, miners can vote which upgrades they support instead of hard forking the chain. These votes are conducted roughly every 14 minutes. After the change,  proposed software changes that aren’t voted would be automatically removed from the miner’s software after a predetermined amount of time.

With so much at stake, many of the major proponents of each platform have taken to social media to broadcast their arguments for their faction. Spectators can see the conversation descend into bickering and personal attacks.

Many of these comments revolve around Craig Wright. His controversial claims around the S.V. proposal, attacks against opponents, and past claims of being Satoshi Nakamoto have whipped Twitter into a frenzy.

Below is an example of the comments by Wright attacking ABC pillars Jihan Wu, Bitmain co-founder, and Roger Ver:

They can piss off to #Dash

They are NOT adding this to #BCH

This is the ONLY real use case they have and it is not happening!

The whole BCH community are working together to kick Fake Satoshi out. The resisitence against cult leader proves the inner strength and sophistication of the BCH ecosystem!

Roger Ver has taken to Youtube denouncing Craig while voicing his concerns about the S.V. fork:

And, even controversial crypto-anarchist and blockchain advocate John McAfee has come out to support Wu and his mission to implement Bitcoin ABC while distancing the cryptocurrency from Wright and the S.V. version of the software.

Those who stand against Jihan Wu are a idiots who don't see the realities of the playing field. Please, get real. I will not let my ego destroy me by making me think I could challenge the only real power in this space. My email to him should make it clear to anyone where I stand. pic.twitter.com/WJBJyzaEAy

Ramifications of the Hash War

What the dispute boils down to are how aggressively the Bitcoin Cash protocol should be upgraded and which faction gets to choose and frame those decisions.

Renowned Bitcoin Cash software developer under the alias ‘theZerg’ makes a telling comment about the conflict: both sides want “no changes, no matter how reasonable, except mine [the respective faction’s].”

Rather than compromise on features, he said that:

“Instead, the periodic hard fork is being used to ‘bundle’ individual organizations’ favorite features into a single ‘swallow the sweet with the bitter’ package.”

What’s interesting is that the features that ABC and S.V. are proposing are not necessarily mutually exclusive. It would be possible to implement most of the features from both sides without fracturing the community.

Instead, it appears those in the ABC and S.V. camps would rather shake the stability of BCH with hostile mining attacks. This instability has devastated the price of Bitcoin Cash

Bitcoin Cash lost 27% of its value in the last seven days, compared to the 13% drop in the overall cryptocurrency market.

That said, Bitcoin Ultimate may be able to broker a truce. According to statistics from Bitcoin Cash data aggregator Coin Dance, the compromise party is gaining on ABC. But, the damage may already be done to investor and user confidence in Bitcoin Cash.

In the end, the longest chain will win, but at what cost to the Bitcoin Cash community?

Research: Bitcoin Cash Declining in Adoption and Merchant Use Cases

Blockchain analysis and forensics firm Chainalysis recently produced a report on payments received by the world’s top 17 cryptocurrency merchants, concluding the role of Bitcoin Cash (BCH) has steadily decreased in most day-to-day transactions.