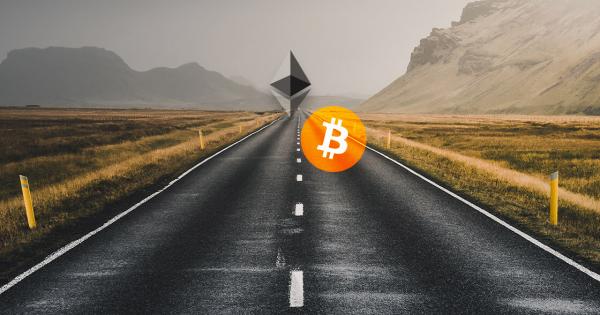 Photo by Luke Stackpoole on Unsplash

Effectively doubling in size since December 2017, the Ethereum network now hosts 35 million unique addresses — 100,000 new registrations being logged each day. According to its last-known position in March 2018, Bitcoin stands at 24 million (its blockchain explorer no longer provides this data).

Where these figures may impose, Ethereum’s growth stands in the shadow of its former self — the network welcoming more than 300,000 new addresses on several days during ETH’s January all-time high.

Tapering off alongside the opening of Q1’s bear market, the fervor for address creation can be seen to decline at the close of January. The overall growth trend, however, has not declined.

Ethereum’s overtake may deal a sentimental blow to Bitcoin, yet it must be noted that these figures only represent the on-chain transactions. Users of a centralized exchange — Binance or Coinbase, for example — may avoid using addresses entirely and are not represented in this data.

Furthermore, 35 million unique addresses may not equate to 35 million active users — users of Ethereum may create and use multiple addresses for transacting or executing smart contracts.

Instead, active unique addresses and transactions per day may paint a more accurate picture of a blockchain’s true total number of users — denoting the number of wallets actually sending or receiving assets in any given day.

These metrics may be fuel for proponents of ‘the Flippening’ — a cult-like internet community who believe Ethereum will dethrone Bitcoin as premier cryptocurrency by market capitalization.

While mostly propagated by staunch backers of Ethereum, “the Flippening” may be losing its somewhat cult-like status and coming closer to becoming hegemonic thought. Roger Ver, for one, appears to believe such an event may be on the horizon.

“Ethereum could overtake Bitcoin by the end of the year and bitcoin cash could do the same before 2020.”

Where speculation may fall on deaf ears, numbers speak volumes. While Ethereum’s market cap may constitute only 44.7% of Bitcoin’s $157 billion, it would appear to be outpacing the original blockchain in technological ambition.