Ethereum Suprasses $1,000 On Strong Market and Launch of Casper Testnet 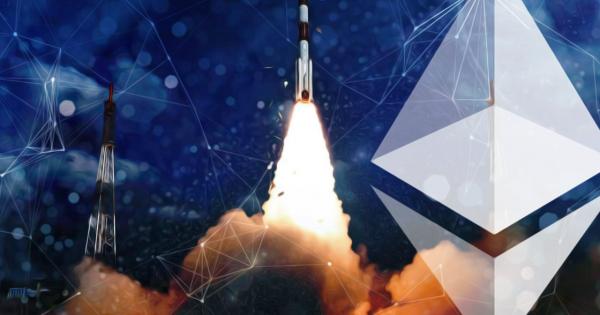 If 2017 was the year of Bitcoin, the first few days of 2018 show that this year might be the year of everyone else. This should not be too shocking. At the start of 2017, Bitcoin enjoyed around 80% of the entire cryptocurrency market cap. Today, Bitcoin’s dominance by market cap hovers around 35%.

Alternative digital currencies (altcoins) increased in popularity as different currencies ascend to prominence. At the beginning of December, Litecoin was a sub $100 currency. A powerful December price surge pushed its value up over $350 before settling to current prices around $300.

This week Ripple had everyone’s attention. The enterprise-focused alt-coin was priced at less than $0.50 at the beginning of December. It’s now trading at over $3. Ripple’s more than 35,000% rise in 2017 made it a late winner for the best performing crypto-asset in the world.

Now, Ethereum is having its moment. After an early price hike in December, Ethereum was relatively stable throughout the month. Throughout December, Ethereum remained around $700. However, the new year brought new changes for Ethereum, and the price shot up about $100 a day.

On Thursday, Ethereum surpassed the $1,000 mark for the first time. Although Ripple’s recent run makes it the second most popular cryptocurrency by market cap, Ethereum’s price increase helped it creep closer to second place, a mantel that it held for most of 2017.

The recent price improvements follow Ethereum’s test launch for Casper, which will transition Ethereum from a proof of work (PoW) model to a proof of stake (PoS) algorithm.

Ethereum’s current PoW is the same approach used by other cryptocurrencies including Bitcoin. In a PoW model, the blockchain is maintained by “miners” who complete cryptographic puzzles that validate transactions and document the data in the blockchain. For their efforts, miners are compensated in freshly minted currency.

Although cryptocurrencies are predicated on the ethos of decentralization, the massive amount of computing power required to complete PoW algorithms have made some digital currencies more centralized. Additionally, there have been concerns about the environmental impact of mining because it takes an incredible amount of energy to mine cryptocurrencies at scale.

Cryptocurrencies increasingly depend on private companies with large mining facilities to maintain their speed and efficiency. Moreover, as studies begin to emerge about the incredible amount of energy being consumed for cryptocurrency mining, there is an added incentive to improve the process.

As a result, some cryptocurrencies are moving away from PoW and toward a PoS model.

According to Blockexplorer, proof of stake on the Capser test-net is working via the following method:

“Participants can become validates by locking up or ‘staking’ ether. Validators will take turns proposing and voting on blocks, and both the weight of their votes and the size of their rewards will hinge on the size of their stakes.”

This setup should help remedy both the unwanted centralized and excessive energy use prompted by PoW.

However, PoS is not without its drawbacks. Since users’ chances of getting a block depends on how much Ether they can stake, the wealthiest participants are more likely to earn the mining rights and the reward. In other words, the rich get richer.

There are other concerns about protocols when a fork occurs, but Ethereum is working to resolve those issues by penalizing validators that don’t try and work the consensus back to a single chain.

Ethereum’s Place in the Crypto Space

Ethereum doesn’t fit in with the rest of the alt-coins. First launched in 2015, Ethereum is often considered a more refined version of Bitcoin that emphasizes its blockchain technology for platform development. In other words, Ethereum isn’t just a platform for itself. It’s a platform for everyone else to build their platforms as well, and that multiples Ethereum’s value and market presence.

It’s led by Vitalik Buterin who is widely considered one of the foremost experts on blockchain technology.

There is already significant interest from the business community in Ethereum’s platform. Initiatives like the Enterprise Ethereum Alliance are developing use-cases for the platform.

Whether the Casper iteration is the move that allows Ethereum to appropriately scale and mature is obviously unknown. It’s still in beta testing, and many changes will still be made.

However, it is an encouraging reminder that blockchain platforms are not just resting on their achievements. They are continuing to develop to meet the growing demands for their services.