Despite its unparalleled rise this year, Bitcoin is perpetually derided by its critics. 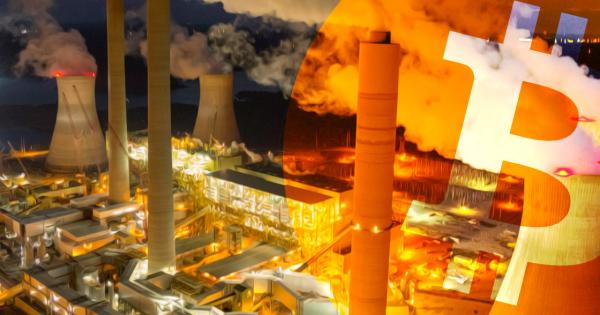 Despite its unparalleled rise this year, Bitcoin is perpetually derided by its critics. For example, JP Morgan Chase CEO Jamie Dimon was one of many financial bigwigs who generated a lot of attention by criticizing Bitcoin and describing the currency as a “fraud that will eventually blow up.”

Still, with so much good news surrounding Bitcoin, it’s easy to ignore the critics and to focus on the encouraging developments for the currency. After all, Bitcoin has appreciated more than 800% this year, and its place as the dominant cryptocurrency has never been more evident.

There is, however, one criticism that is valid and troubling: Bitcoin uses a lot of energy.

The statistics are pretty staggering. According to Digiconomist, Bitcoin mining consumes 291- kilowatt hours of electricity per transaction. If you, like me, don’t understand a kilowatt hour, consider that Bitcoin’s energy consumption could power almost ten U.S. households for an entire day.

With hundreds of thousands of Bitcoin transactions taking place each day, Bitcoin is consuming an impressive and startling amount of electricity.

On a global scale, Bitcoin is responsible for .13% of the world’s electricity consumption, which is an extreme amount of energy for a single endeavor that doesn’t even yield a physical product.

With Bitcoin surging through the $8,000 price point and showing no signs of slowing down, it’s a good thing that an Austrian startup is claiming to have a solution for the high energy consumption of cryptocurrencies like Bitcoin and Ethereum.

The company, HydroMiner, is utilizing green energy that it is drawing from hydropower stations in Europe’s Alpine region.

They are using this green energy to power crypto mining equipment that, according to their White Paper, “mines all scalable cryptocurrencies.”

HydroMiner aims to reduce the overall cost of cryptocurrency transactions by relying on efficient, low-cost natural resources to power crypto-mining machines. In some ways, their proposition sounds a little far-fetched, but when considering the other alternatives, there is an alluring sensibility to the idea.

Crypto-mining is so energy intensive because it relies on a computer’s GPU, which is an energy-sucking computer component often associated with computer gaming. That’s why, according to Forbes,

“The typical gaming computer consumes as much power each year as approximately three refrigerators.”

Of course, crypto mining doesn’t use the GPU lightly. The powerful algorithms that miners process put significant strain on the GPU and cause it to utilize an inordinate amount of energy.

So far, HydroMiner is off to a good start. They recently completed their ICO and raised almost $3 million to finance the project’s launch. These funds will help establish the hydro generators in strategic locations to maximize their effectiveness.

In reality, HydroMiner is only prepared to make a small dent in the overall energy use for Bitcoin mining. Crypto-miners are positioned all over the world, and not everyone can harness a waterfall to power their PCs.

HydroMiner’s product isn’t an infinitely scalable solution to Bitcoin’s energy gluttony, but it is a creative way to help solve the problem.

The Future of Mining Crypto

It’s becoming increasingly lucrative to mine cryptocurrencies. As their prices increase – and they have almost unanimously been growing this year – the incentive grows to spend large amounts of money on energy to power crypto-mining devices.

Therefore, innovators have plenty of motivation to develop more novel solutions that can continue to have an impact on this market.

When HydroMiner is grouped with other like-minded companies that are bringing their energy resolutions to market, we may be able to say that we have found a comprehensive solution to Bitcoin’s energy gluttony.

Until then, Bitcoin miners will continue to utilize the energy output of a small country, even though their profits are leached away with each electricity bill.