On the fifth anniversary of Ethereum’s 2014 pre-sale, ConsenSys took a look back at the network’s history. 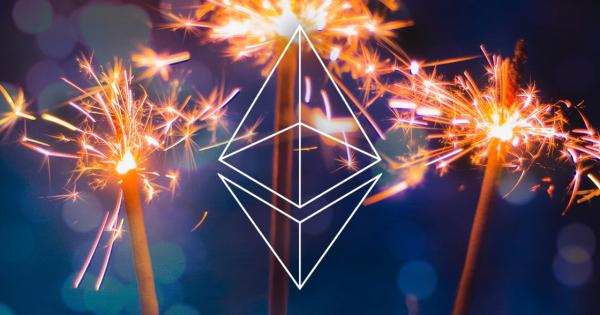 On the fifth anniversary of Ethereum’s 2014 pre-sale, ConsenSys took a look back at the network’s history. This year has proved to be critical for Ethereum with data showing that it managed to rise from the 2018 crypto crash better and more popular than ever.

Ethereum, the world’s second-largest cryptocurrency and one of the most popular blockchain networks on the market, is currently celebrating its fifth anniversary. Its pre-sale started in mid-2014 and saw a whirlwind of activity in its lifetime. Ethereum incubator ConsenSys took a look back at Ethereum’s history and highlighted the success the network has seen in 2019.

The network is also slowly transitioning towards proof-of-stake. After undergoing the Constantinople hard fork back in February, Ethereum is now inching closer to its much-anticipated Serenity update.

Such a huge increase in popularity and usage isn’t accidental—Deloitte’s 2018 report found that 95 percent of companies plan to invest in blockchain technology in 2019, while 84 percent believe blockchain is eventually scalable and will achieve mainstream adoption. With Ethereum being the world’s largest blockchain platform, it could become the go-to network for companies looking to enter into blockchain.

To support the ever-increasing number of users and transactions, the Ethereum network needs constant upkeep. An Electric Capital Dev Report from March showed that Ethereum had the highest number of developers working on core protocol. It outranked Bitcoin, which has a much larger market cap, and research-oriented Cardano.

The study found that Ethereum had the most robust and consistent developer growth, with an average of 240 active developers in January 2019. This represented an increase of 23 percent from the 190 developers that worked on the network in 2018.

The work put into Ethereum is what gives companies the confidence to build and host their dApps on the network. ConsenSys said that of the top 50 dapps as ranked by State of the Dapps, 29 of them are built on Ethereum.

All of this could point to a hugely successful year for Ethereum. While ETH seems to have hit a few bumps in the past couple of weeks, it seems that it has entered a consolidation phase. We are yet to see how its price holds out when many altcoins appear to be struggling against Bitcoin’s rising dominance.