'The Dogefather' makes an offer to McDonald's, daring the fast-food giant to accept his fav meme coin for payments. 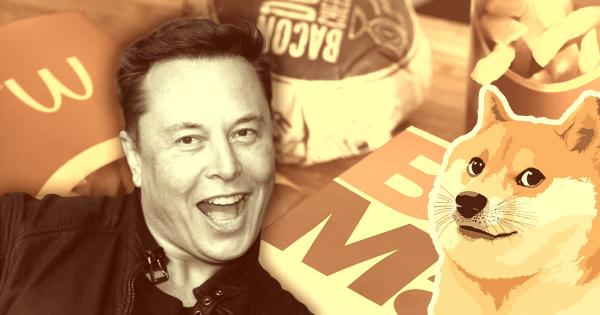 The pressure is on, with all eyes on the fast-food chain now, which, thus far, hasn’t been accepting crypto payments–outside of El Salvador.

Committing to a happy meal on tv

“I will eat a happy meal on tv if McDonald’s accepts Dogecoin,” wrote the self-proclaimed Dogefather on Twitter.

Musk’s dare caused the price of Dogecoin to jump over 6% in a matter of minutes.

Crypto investors on Twitter turned to memes and humor for easing the drama of the market downturn–president of El Salvador amongst them.

Nayib Bukele recently changed his profile picture–joking about his next career if his Bitcoin plans fail to materialize.

how are you doing people who run crypto twitter accounts

“How are you doing people who run crypto twitter accounts,” wrote the food chain, already entangled in another conversation on Twitter–the one about DOGE payments–spurred by Billy Markus, the founder of Dogecoin.

Musk became broadly known for his open support of the meme coin in the past.

Recently he even argued that, although not the ideal currency system, it’s still fundamentally better than anything else he’s seen.

According to him, Dogecoin is poised for mainstream adoption due to low transaction fees and “having a much higher transaction volume capability than Bitcoin.”

A not-for-profit foundation formed by members of the Dogecoin team in 2014 was relaunched last year after several years of being inactive.

Leveraging support, advocacy, trademark protection and governance for the project, the Dogecoin Foundation was resurrected with some seasoned industry players as part of its board of advisors.

The group that meets monthly to discuss issues relating to Dogecoin is made up of Dogecoin founder Billy Markus, the project’s core developer Max Keller, Ethereum founder Vitalik Buterin and Elon Musk as represented by the head of the Musk’s family office, Jared Birchall.

End of last year, the foundation revealed big plans for Dogecoin in 2022–setting the focus on utility.

How does Bluesky fit in with Dogecoin and Musk’s plans for Twitter?