The star money manager made a big Bitcoin bet back when the project was in its nascency. 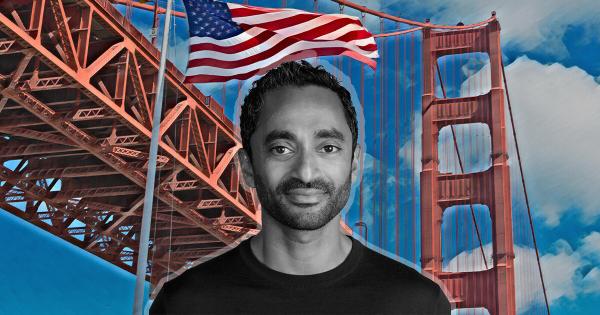 Image by Falkenpost from Pixabay

The star money manager made a big Bitcoin bet back when the project was in its nascency. And he now wants to make the US a better place.

Social Capital founder Chamath Palihapitiya wants to run for the position of Californian Governor, he said in a tweet on Tuesday. And whether he may have been joking or not, Palihapitiya is a Bitcoin bull and has focused his recent work on the betterment of society.

In addition to his work with Social Capital (which bets on tech firms) and being one of the first employees at Facebook, Palihapitiya is also the current chairman of space travel and exploration firm Virgin Galactic.

Wet your beak California. 0% taxes, best paid teachers in the country and a bonanza of climate friendly jobs. https://t.co/gfoPSXziuL pic.twitter.com/3QcqZUfFoI

“It’s on,” he wrote on Twitter, working in his candidature in a brief one-liner on his site, “California is a mess — it’s too expensive, our teachers are underpaid, and our schools aren’t good enough.’

California has faced a brain drain in the past few years with high taxes, low incomes, and below favorable social conditions for teachers and other critical workers. Other education-related proposals are “no student loans” and “free school vouchers.”

“I’ll give students a free voucher to pick any school they want to attend. Education is a human right and our children should be able to choose where they receive it,” claimed Palihapitiya in his post.

Palihapitiya further proposes a $70,000 minimum salary for teachers on his candidate site, alongside a 0% state tax to raise California’s coffers to over $300 billion. Lastly, he adds that his office would make California a global center for technology and climate jobs, achieving this by “realigning incentives rather than pushing them away.”

Palihapitiya is rumored to have purchased a “large” supply of Bitcoin in 2013 or 2014—in the region of 100,000 Bitcoin. He holds a bullish view of the asset, stating just earlier this month that BTC could easily go to $100,000 and beyond.

His reasons? That today’s leaders are “not as trustworthy and reliable as they used to be.”

Meanwhile, unlike Bitcoin price chasers, Palihapitiya has famously stated his intentions to engage in betterment for society with his gains. Last year, he said he would “buy out” the Hamptons—a vacation spot for the rich and well-heeled—and turn into sleepaway camps for children and build low-cost housing instead.

When $BTC gets to $150k, I will buy The Hamptons and convert it to sleepaway camps for kids, working farms and low-cost housing.

A perfect way to spend part of the gains if you were to ask me.