Who let the DOGE out? 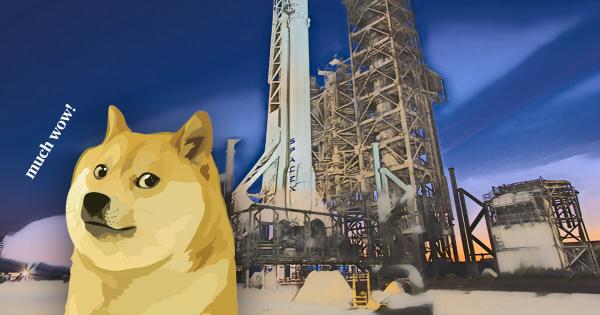 Meme currency Dogecoin (DOGE) is probably a joke no longer, if today’s price run and market cap is anything to consider.

The meme coin doubled its value in a single day in a price surge that left nearly everyone surprised. It trades over $0.35 at press time, reached a high of $0.45 earlier today, and breached into becoming the fifth-largest cryptocurrency with a hefty market cap of $53 billion.

Doge Barking at the Moon pic.twitter.com/QFB81D7zOL

Dogecoin is intrinsically valueless and is intended to have absolutely no use, save the memes and jokes. Co-creator Jackson Palmer launched the currency as an alternative to Bitcoin that could reach a broader demographic, with its 1-minute block intervals made it much faster than other blockchains at the time.

But the coin has since ended up seeing unprecedented success in the past few years, catching the attention of retail investors and mainstream news outlets worldwide and even billionaires like Mark Cuban of ‘Shark Tank’ fame and Tesla CEO Elon Musk.

Supporters at now calling for a price surge to $1, which, at its current 129 billion circulating supply, would make it worth over $129 billion—or the world’s third-largest cryptocurrency behind Bitcoin and Ethereum.

Interestingly, the rest of the crypto market moved downwards, even as DOGE doubled. Bitcoin tumbled by $3,500, Ethereum by $300, Binance Coin by $50, and other large-caps recorded decreases of a few percent as well.

Some DOGE traders were burned, however. Data from analytics tool Bybt showed over $680 million worth of Dogecoin positions were ‘liquidated’—or put up as collateral for traders to place bigger bets (the collateral amount is lost if the trade moves the other way).

The ever-awaited altseason — a colloquial term for pumping altcoin markets — has arrived earlier than expected, if some analysts are to be believed. 2 min read

Over the past few months, there have been expectations of an extremely strong Dogecoin (DOGE) rally. 2 min read

The Mavs recently announced they would accept DOGE for tickets and merch, few could have predicted how the fan's response. 2 min read