So far, the Dogechain Twitter has not addressed concerns of token dumping just one day after DC airdrop distribution. 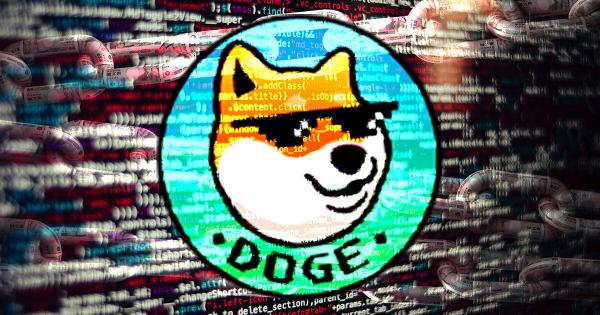 Nice a wallet that received 20,000,000,000 DC for free ties directly back to the deployer and has already started dumping tokens on people.

Dogechain launched their DC token on Aug. 24 via airdrop to qualifying wallets. The qualifying criterion was any Dogechain wallet that had interacted with the protocol before Aug. 23. This would necessitate adding Dogecoin(DOGE) liquidity into the Dogechain protocol.

Reddit user u/evelynvee posted that the Dogechain dev wallet mentioned by @ZachXBT was dumping the 20 billion tokens received from the airdrop at a peak of  1 million tokens a minute.

According to u/evelynvee, DC token holders generally cannot dump their tokens as there is an 8 million DC token fee to bridge to the Ethereum chain, plus a minimum transfer of 9 million DC tokens ($16,000).

The official Dogechain Twitter has not responded to comments and requests about what is happening.

Dogecoin Foundation warned users not to risk their DOGE

Dogechain pitched itself as a layer 2 scaling solution to bring DeFi, NFTs, and gaming to Dogecoin.

Borrowing from the Dogecoin philosophy, the Dogechain team said the project is community-based and champions the idea of equality and fairness.

“Dogechain stands for fairness and equal opportunity for all. Our goal is to create a blockchain that is truly owned by the people.“

Nonetheless, Dogecoin Foundation board member Jens Wiechers warned that Dogechain is not a related product and that “paid media,” including social media shills, are disseminating false information to the contrary.

Similarly, Dogecoin dev @cb_doge said Dogechain is “another knock-off token,” while cautioning DOGE holders not to risk their tokens.