The MLB team said it would accept DOGE for pairs of tickets. 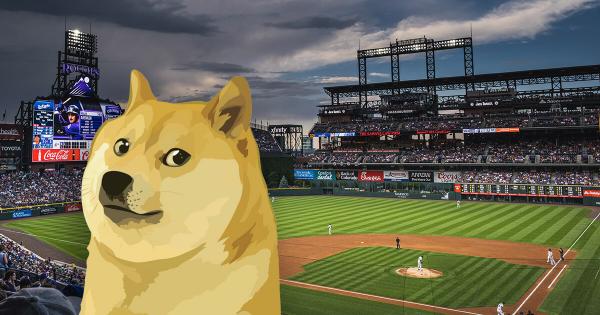 Photo by Owen Lystrup on Unsplash

Dogecoin surged by 14% yesterday to all all-time highs after Oakland Athletics, a Major League Baseball (MLB) team, announced it would accept DOGE for selling pairs of plaza infield tickets.

MLB is an American professional sporting league and is one of the most popular sporting events in the world. Teams have previously put out their own cryptocurrency acceptance plans, but yesterday’s DOGE announcement is one of the first such moves involving the meme coin.

The Athletics had previously offered a Bitcoin promotion at the start of the season offering fans the chance to buy a full season suite package for one Bitcoin ($56,155 at the time) versus paying $64,800 in US dollars. However, it has jumped on the Dogecoin bandwagon now.

“Join us at the ballpark as the Blue Jays roll into town! Two-seat pods in the Plaza Infield are available for 100 Dogecoin for the series,” a tweet by the Oakland Athletics read. The Athletics are a nine-time MLB championship winner.

Join us at the ballpark as the Blue Jays roll into town!

Two-seat pods in the Plaza Infield are available for 100 Dogecoin for the series.

The sales of tickets for Dogecoin by the Athletics comes off the back of other sporting teams seeing considerable success on similar moves.

As CryptoSlate reported last month, American basketball team Dallas Mavericks had merchandise sales of $122,000 from Dogecoin as of April 16, including a 550% increase from the month of March to April.

Mavericks owner Mark Cuban, who has become somewhat of a big proponent for the crypto and decentralized finance (DeFi) market in recent times, said the memecoin (no active development takes place on it as of today) was even poised to reach $1—which would make it the third-largest cryptocurrency and value it at a $129 billion market cap.

Elon Musk Says Dogecoin Could Be the Future of Cryptocurrency https://t.co/6z57FBAGNy

Meanwhile, it remains to be seen how other sporting teams and events include Dogecoin as part of their preferred payment methods in the coming months. But are such moves driven by memes or capitalistic culture? It’s for you to figure out.