Deutsche Bank report: “Bitcoin is too big to ignore”

The German multinational investment bank stated that crypto-assets are now too valuable to ignore. 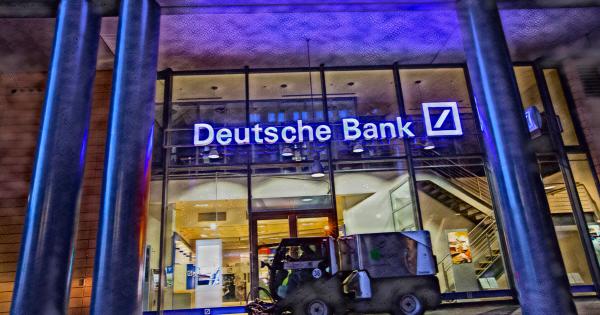 Now that the crypto market is worth over $1.8 trillion, Deutsche Bank stated that Bitcoin is “too big to ignore,” according to a report.

The report outlines the challenges of Bitcoin becoming a medium of exchange or an asset class. It notes that the inherent volatility of the crypto market will continue to rise and fall, depending on investor sentiment.

Bitcoin is here to stay

The bank stated that crypto-assets are now too big to ignore. The inflow of traders and institutional demand is growing every day, and banks and governments are aware of that.

“Central banks and governments understand that cryptocurrencies are here to stay, so they are expected to start regulating crypto-assets late this year or early next year.”

Likewise, banks are speeding up their research to issue CBDCs (Central Bank Digital Currencies). With the hyperinflation of fiat currency, more banks are considering adopting crypto.

The report states that at least 80% of the world’s 66 central banks are exploring crypto-assets. Moreover, 20% of them are likely to issue digital currencies in the next six years.

The many challenges for Bitcoin

The report also outlined that Bitcoin’s inherent volatility will remain. But integrating blockchain technology is another challenge — Bitcoin’s throughput (transactions per second) makes it difficult for companies to adopt the Bitcoin blockchain as a medium of exchange.

The integration of blockchain is a worthwhile concept for many companies interested in cryptocurrencies and data shows the perks of adopting Bitcoin’s blockchain. However, one issue is scalability, which makes transaction throughput unpractical. Bitcoin can only process  3-6 transactions per second, while Visa makes over 3000.

While Bitcoin as a medium of exchange remains a challenge, it has become a valuable financial investment, despite its volatility — 70% of all transactions accounted for investments and the rest for payment of goods and services.

According to the bank, the number of predictions against Bitcoin decreased in 2020:

“Every year, people declare Bitcoin (and Tesla) as dead or dying. Since 2010, Bitcoin has been declared dead about 400 times. The number of such proclamations peaked in 2017, but the trend has been decreasing; 2020 saw the fewest Bitcoin obituary predictions in eight years.”

The bank expects that Bitcoin’s value continues to rise as institutional investors and corporations explore ways of embracing crypto-assets.

The latest publicly-traded company that has purchased significant amounts of BTC is Meitu, which recently added $90 million in net purchases. The firm bought 386 Bitcoins ($21.6 million approximately) and 16,000 ETH (around $28.4 million).