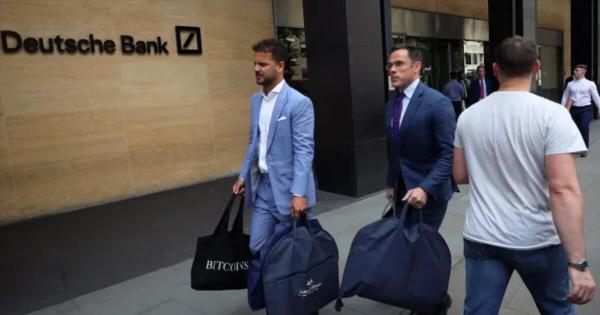 A photograph showing two men walking next to a Deutsche Bank sign-carrying tote bags with “Bitcoins” written on them went viral on social media, leading many to believe they were one of the thousands that were laid off in the bank’s recent staff cuts. However, it turned out that a connection with Deutsche Bank was nothing more than a coincidence.

Deutsche Bank’s recently announced restructuring plans and is expected to cut 18,000 jobs worldwide—a move many have seen as the end of the banking giant. With reporters swarming the bank’s offices around the globe, many photographs showing laid-off employees were published, but none made as much of a stir as the now-iconic “Bitcoin Bag Man” photo.

First published in a Financial Times article, the photograph shows two men leaving Deutsche Bank’s London offices carrying several bags. One of the men, however, is seen carrying a canvas tote bag with “Bitcoins” written on it.

With a distaste for banks going back more than a decade, the crypto community quickly noticed the picture and saw it as a symbol of the clash between traditional and modern finance.

What a great contrasting picture! One (criminal Deutsche Bank) on the verge of collapse👏, the other (Bitcoin) on the way to huge adoption and growth💪.

$DB huge layoffs changing their business model
look at the bag in the hands of the person in front @APompliano said long #BTC and short the bankers …. He may have started the movement #bitcoin pic.twitter.com/2Y66EPE6IG

This is a very ominous picture for the banks 😨🙊

However, after making great strides on social media, the photograph was quickly revealed to be nothing more than a coincidence. A few hours after the photo started going viral, a bespoke clothing company from London joined in on the discussion, saying the men in the photo weren’t fired bankers, but tailors.

Fielding & Nicholson is a London-based bespoke tailoring company, which gained prominence for allowing its customers to pay in bitcoin. The company seemed to welcome the publicity it got from the photograph, as it quickly added a Bitcoin address to its Twitter bio for tips and donations.

The company manufacturing the bag also got an incredible boost in sales from the publicity. The “Bitcoins” tote bag was quickly sold out and there’s no information about a possible restock.

The Bitcoin Bag Man photo clearly mirrors the public sentiment towards traditional banks. With much of the crypto community skeptical towards big players such as Deutsche Bank, anything that shows Bitcoin’s superiority is likely to get traction from the burgeoning crypto community.

Deutsche Bank’s massive layoffs have definitely shaken up the entire market and affected the trust people have in the institution. According to the Financial Times, shares in Deutsche were down 4.5 percent on Monday, trading for around €6.85.