The Conservative MP Matt Hancock stated that the UK needs to be more liberal in its approach to crypto regulation. 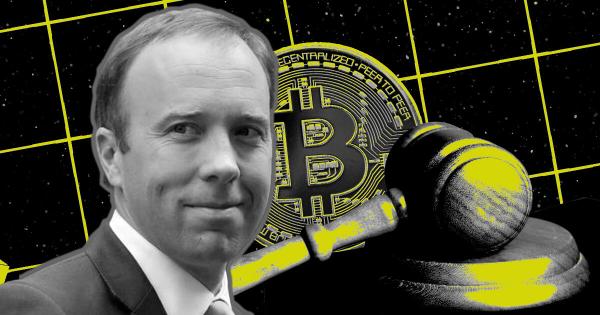 Conservative MP and crypto advocate Matt Hancock in a keynote speech delivered at Crypto A.M.’s 4th anniversary on June 22 called for a crypto-friendly tax and regulatory regime. Despite the extreme downturn in the market, the MP argued that the UK should be liberal in its approach to crypto regulation.

He argued that a stable and attractive tax regime gives space for growth rather than stifling it. Also, he stated that achieving this requires a proactive attitude and “that a smaller part of something is worth more than a larger share of nothing.”

The conservative MP further urged that the UK should not walk around crypto on eggshells. Rather than be concerned about failure, “regulate for growth, for high-quality,” he said.

The former health secretary is a long-term advocate of crypto adoption in the UK and has continued to be despite the extreme market downturn.

Speaking on the recent crypto crash, he said:

“The underlying technology is so powerful. Just because the Dotcom bubble crashed in 2001, we didn’t discredit the internet as a technology.”

He compared the restricted adoption of crypto to the struggles of the internet in the 1990s. He stated that crypto would need to break similar barriers and prejudice.

The MP has also canvassed for the adoption of crypto as an enabler of growth. Stating “Britain succeeds when it embraces new technology,”. Cryptocurrency could “make financial systems more transparent and reduce crime.”

However, the MP publicly mentioned that he does not hold any crypto-asset because “he wants to be able to talk freely about it.”

Likewise, Rishi Sunak, the chancellor of the exchequer in April outlined a plan to make the UK “a global cryptoasset hub.” The plan also included legislating on the use of stablecoins and for the Royal Mint to create an NFT.

Continued crypto restriction in the UK

The FCA on the other hand has doubled down on its effort to regulate crypto use in the UK. The regular has repeatedly warned against the risk of crypto investments, especially as the market has declined this year.

However, the FCA held its first CryptoSprint in May which many termed as the regulator exploring the crypto ecosystem. In a statement released on its website, it stated that the CryptoSprint explored issues facing the crypto world and how the FCA can support and balance innovation with standards that protect consumers.”

Also, the U.K. recently made a turnaround on its proposed KYC rule for users transacting with unhosted or private wallets.

However, Matt Hancock is as critical of the restricted regulations as he is a cryptocurrency advocate. Mentioning “I hate the patronising idea of regulators telling people what they can and can’t do with their money,”.

On that note, he also remarked his opinions on the role of a regulator:

“The job of the regulators is to make sure there is high-quality information and that the market functions effectively. What remit does the state have to tell them what they can and can’t invest in? I think that’s incredibly patronizing,”