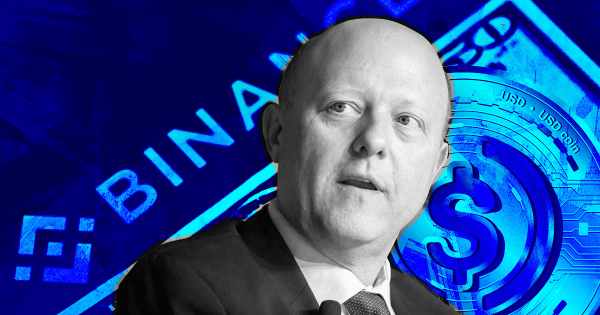 Helpful perspective from @wintermute_t , which is spot on. Converged dollar books on Binance — now same as on FTX and Coinbase — is a good thing. USDC utility just increased. https://t.co/QWfMx7f1cZ

According to Allaire, the move would further increase USDC’s utility and “lead to a gradual net share shift from USDT to BUSD and USDC.”

Allaire continued that FTX and Coinbase already use the Converged dollar books, so, Binance following suit is a welcome development.

According to Gaevoy, removing most stablecoin pairs helps to make the market more liquid and market makers’ jobs easier. He said the move would also benefit the stablecoin because depositing and withdrawing them via the platform would become more accessible.

Meanwhile, Gaevoy pointed out that the move challenges Tether’s (USDT) dominance of the space.

Ultimately until tether improves their operational efficiency (minting/burning is a T+1 process, unlike almost instant in case of USDC/BUSD/TUSD) and mint/redeem cost, it will continue losing ground.

Gaevoy said users would “keep wondering what makes tether so “special” that they need to bother with conversion,” which would increase the liquidity of non-USDT pairs in the long run.

Gaevoy continued that USDT would have to improve its operational efficiency and mint/redeem cost or keep losing ground to US native stablecoins.

BUSD trading volume spikes by over 60% in 24 hours

BUSD trading volume increased by 65% over the last 24 hours to $8.4 billion, according to CryptoSlate data. BUSD is the third-largest stablecoin with a market cap of $19.4 billion.

Similarly, USDC’s trading volume rose by 25% to $7.2 billion. USDC is the second-largest stablecoin by market cap, with $52 billion.

Meanwhile, Tether’s trading volume also spiked by 40% during the same period to $49 billion. USDT is the largest stablecoin in the space, with a market cap of $67.5 billion.

Overall, $65.5 billion stablecoins were traded over the last 24 hours, and Tether’s USDT accounted for over 80% of these trades.