Charles Hoskinson says even going slow and steady, Cardano was the first for eUTXO and one of the first to market for Proof-of-Stake. 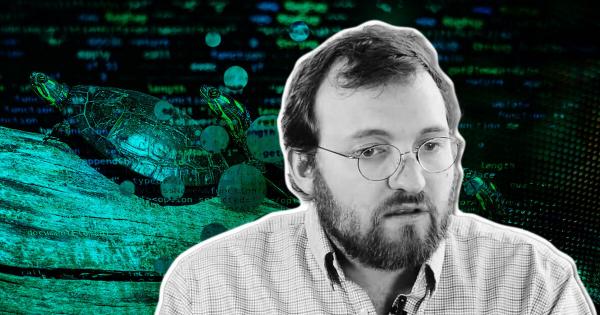 Speaking to the Crypto Mile, Cardano founder and Input Output CEO Charles Hoskinson discussed how blockchain could revolutionize the world.

During the discussion, the tortoise-hare analogy was broached – which asserts that Cardano is slow to release developments.

Commenting on this, Hoskinson said the analogy “irritates” him, and he “fundamentally rejects” it on the grounds that Cardano has been first, or near first, on several technologies.

Cardano has long been accused of being a tortoise

Cardano is described as a third-generation platform developed with formal methods to achieve the blockchain tenets of scalability, interoperability, and sustainability in a real-world setting.

Formal methods refer to the use of the scientific method, which involves discovery, peer review, and cryptographic research.

As a systematic and methodical approach, developmental releases have been delayed in the past. The most recent example of this was the Vasil upgrade, which was initially scheduled for release on June 29.

However, following a core team meeting, it was decided to delay the upgrade to the last week of July. Hoskinson said a factor in this was the “measure three times and cut once” mandate he sent out to engineers following the Terra implosion.

Hoskinson disagrees for these reasons

As far as the tortoise-hare analogy is concerned, Hoskinson clapped back, saying Cardano was one of the first Proof-of-Stake protocols to market.

As expected, comparisons with Ethereum were made as he commented that even though Cardano took the slow, systematic development path through peer review, it still pipped Ethereum to the PoS post.

“We were one of the first of the third generations to be in market with PoS. Ethereum is still not on PoS, and they had a two-year head start on us…”

In addition, Hoskinson also made a similar point on Cardano being the first protocol to use the Extended Unspent Transaction Output (eUTXO) accounting model.

This is an adaptation of Bitcoin’s UTXO accounting model, which works by calculating each transaction spending output using prior transactions. This allows new outputs to be spent by transactions in the future.

The eUTXO model improves on the UTXO model by supporting an expressive script, enabling more sophisticated and complex operations.

Closing off, the Cardano founder said it “irritates” him when people say we’re slow. Even so, he still maintained that taking additional time is always the appropriate action for building infrastructure that will still be here in a hundred years.