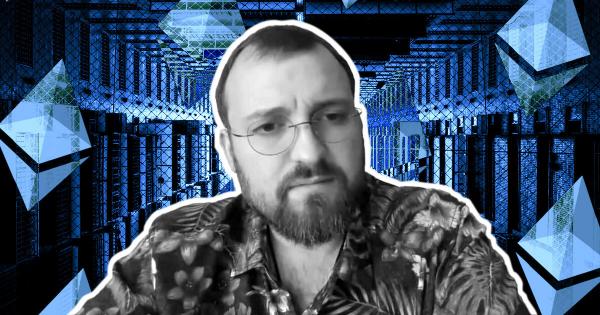 Cardano (ADA) founder Charles Hoskinson has called Ethereum (ETH) the “Hotel California of Crypto” in response to a tweet that claimed that ETH staking withdrawals might be delayed beyond the Shanghai upgrade.

Ethereum is becoming the Hotel California of Crypto https://t.co/oRUw4kxvfS

A screenshot from the Ethereum developers Discord group showed Micah Zoltu, founder of Serv.eth Support saying that all documentation and publications have clarified that there’s no expected time for withdrawals of staked ETH.

And for the record, Ethereum withdrawals are *not* scheduled for Shanghai; there is no ETA. Key developer is not happy that exchanges and others keep stating otherwise. Source: their discord. pic.twitter.com/PoWnb0fqeZ

“Sure, I’m not suggesting that we never implement withdraws. I don’t think there is significant urgency. I think there are other things that are far more critical to the long-term health of Ethereum than stakers being able to withdraw in 2023 rather than 2024.”

The comment appears to be a reaction to Kraken’s email, which told its customers they would be unable to access their staked ETH until after the Shanghai upgrade.

The Shanghai upgrade is expected to happen between six to 12 months after the Merge.

CryptoSlate contacted Micah Zoltu for a clarification of his message but did not immediately get a response.

Many within the community expect access to their staked Ethereum by 2023 after the Shanghai upgrade, but the latest information from the Ethereum developers discord group suggests otherwise.

The Ethereum foundation had also stated that the “Shanghai upgrade will enable staking withdrawals.”

Charles Hoskinson further questioned Ethereum’s staking mechanism, wondering if there was not another way of ” implementing proof of stake that doesn’t require locking assets like this.”

Unlike Ethereum PoS, Cardano PoS does not require users to lock their assets since they stake directly from their wallet and can withdraw whenever they want.

However, Micah clarified his position on why withdrawals are not a priority. According to him, stakers are wealthy and can afford all the expensive hardware needed for staking.

Stakers on Cardano are everyday people who don't need to be wealthy. I guess that's the philosophical difference https://t.co/ScJ6hZKlMi

Hoskinson agreed with this saying that Cardano stakers are everyday people.