Bitcoin’s slides back at $38k, but funds keep moving out of exchanges

After recovering last week, bitcoin has again fallen down below $40,000 over the weekend. At the same time, funds keep moving out of exchanges, continuing a six months trend. 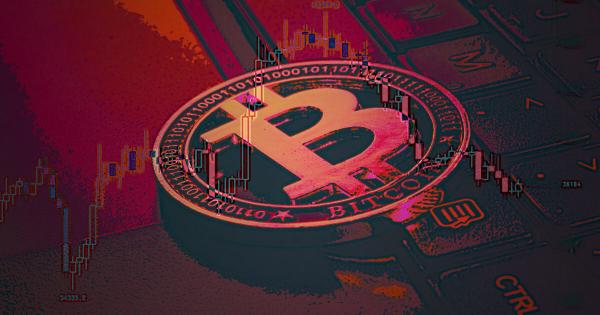 As the war in Ukraine moves into its third week, if there still is a demand for bitcoin (BTC) and other cryptocurrencies in the Russian and Ukrainian markets, to try to escape sanctions or as an escape route for people to safeguard their funds, this does not seem to have reflections on market prices of cryptocurrencies.

Crypto’s volatility over the past week has been expected while many are trying to figure out how to adjust to the geopolitical situation. Last week’s markets saw some buying pressure come from Russia, Ukraine and other parts of eastern Europe, as people are scrambling to save their money.

Victims of the war may be unloading crypto

The slightly bearish market over the weekend shows signs of either this buying pressure has slowed down or perhaps turned into a weak selling pressure as victims of the war are unloading crypto after rescuing themselves and passing a border to another country.

After all, just before the Russian invasion, Ukraine had the highest crypto adoption in Europe, and the government passed a law formally legalizing crypto in the country. It’s not a wild guess that much of the cryptocurrencies held by Ukrainian citizens will come in handy during the crisis as traditional financial systems and payment rails may see irregularities and disruptions.

Since a local top at $44,790 on Wednesday last week, the price of bitcoin (BTC), the largest cryptocurrency by market cap, has been on a decline. Over the weekend BTC has been fairly stable hovering around or just above $39,000. At the moment of writing, bitcoin is trading around $38,400 after a small dip early on Monday.

Bitcoin is moving off exchanges

Meanwhile, and according to data from Santiment, Bitcoin continues to see coins moving off of exchanges, presumingly to so-called cold storage, while prices are near a 6-month bottom. Funds moved off exchanges means those funds are also taken away from immediate liquidity, meaning holders do not intend to sell in the short term. The opposite, funds moving to exchanges, usually means holders intend to sell.

Interestingly, 21 of the past 26 weeks saw bitcoin moving more off of exchanges than on to exchanges, according to Santiment. Traders should look out for major outflow spikes as price rise indicators.

Though major western exchanges may still open to Russian customers, exchanges are keeping a steady eye on the sanctions list and they will comply with sanctions regulations.

At the time of writing, bitcoin (BTC) is trading at around $38,400 after bearish sentiments at the end of last week. Bitcoin is down 1.7% on the daily, but still up half a percent on the week. Zooming out, bitcoin is down 45% since the all-time-high price of $69,044 on the 10th of November.

On the Ethereum side of the market, the second-largest cryptocurrency by market cap, addresses holding between one million and ten million ether (ETH), Ethereum billionaires, have historically indicated upwards price trends as they accumulate more ether.

As per data from Santiment, these addresses currently hold 21.6% of all ETH. They have accumulated 2.2% more of the supply over the past 6 months despite the price correction. This may be a positive price indicator for ether.

Terra’s LUNA token, the poster child of crypto the last several weeks, has lost some of its strength over the weekend as the tokens lost 3% in the past 24 hours. However, LUNA is still up 11% on the week, 50% the past 30 days, and up 875% on the year. The total market cap of LUNA is now down below $30 billion, but the tokens still ranks at number seven, holding off both Cardana (ADA) and Solana (SOL), which saw themselves passed by LUNA last week.