The Tesla CEO’s reputation has taken a huge hit in crypto circles, but many still seem to react based on his tweets. 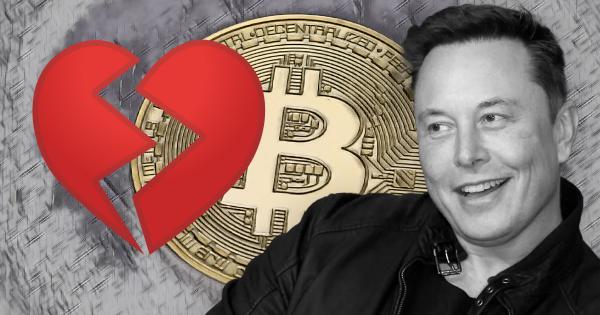 Bitcoin, the world’s largest cryptocurrency by market cap, tumbled down $3,000 this morning after Tesla CEO Elon Musk tweeted about the coin with a Linkin Park song reference.

He followed up with a tweet reply about Dogecoin—seemingly his favorite cryptocurrency—causing a small pump in the memecoin before it fell along with the rest of the crypto market.

“So in the end it didn’t even matter?” read part of the meme that Musk posted, a reference to the popular Linkin Park song “In The End.” He used a ‘broken heart’ emoji with the meme to add fuel to the fire.

Futures traders were partially hit by the tweet. Data from on-chain analytics tool Bybt showed over $80 million worth of Bitcoin trades were ‘liquidated’ in the hours after Musk’s tweet, adding to the $200 million worth of crypto futures liquidated in all.

Musk’s tweets come at a time when his reputation in crypto circles seems to have taken a hit. As previously reported by CryptoSlate, sentiment data from Awario shows tweets of a positive opinion about Musk reached a new low last month.

.@elonmusk’s positive/negative sentiment on Twitter has hit a new low since he announced Tesla would no longer accept #bitcoin for payment. The reversal sparked a 35% decline in the price of $BTC & a wave of negative tweets

It has even caused some like Rusell Okung, a popular American footballer and Bitcoin proponent, to put up a billboard in Miami (and around SpaceX’s headquarters) that reads, “Stick to Space, Elon.”

A press release accompanying the campaign noted the move as a “gentle reminder to the public” about Musk’s being a newcomer to crypto space, one who should “not be considered an authority on the topic.”

But bedroom traders seem to not be listening.